Kremlin Sees No Reason to Blame Navalny Incident on Russia

TEHRAN (defapress)- There is no reason to blame Russia for what happened to blogger Alexei Navalny, Kremlin Spokesman Dmitry Peskov told reporters on Thursday.
News ID: 81927 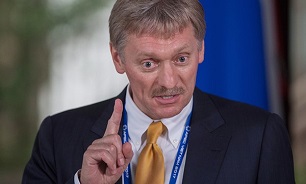 "We aren’t inclined to accept any accusations in this regard," the Russian presidential spokesman added.

Peskov said that he did not see people and forces in Russia that could benefit from the suspected poisoning of blogger Navalny.

"I cannot answer your question who could benefit from that person’s poisoning. As a matter of fact, I don’t think that anyone could stand to gain from that, if one just takes a sober look at things," Peskov said.

"We certainly would not like our partners in Germany and other European countries to jump to conclusions and make assessments," Peskov noted, adding that Moscow would like to maintain the dialogue on the issue with them.

Navalny was taken to the hospital in Omsk on August 20 after he felt sick on a plane en route from Tomsk to Moscow. He sank into a coma and was put on a lung ventilator. Later he was delivered to Berlin’s Charite hospital, where doctors said they had found traces of intoxication in the patient’s blood. The medics now say that the symptoms of intoxication are gradually easing.

The German Cabinet of Ministers on Wednesday announced that German toxicologists had identified traces of a Novichok class agent in Navalny’s body. Berlin asked Moscow to clarify the circumstances of the incident and promised to inform the Russian ambassador on the results of tests.

The German Cabinet’s Spokesperson, Steffen Seibert, said Germany would inform the EU, NATO and the OPCW on the latest findings concerning the Navalny incident and together with its partners would take measures depending on Moscow’s response. He added nothing, though, about what such measures might be like.