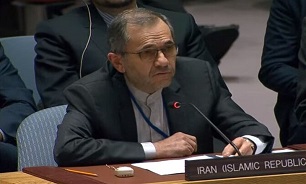 “The policy of maximum pressure by the US on Iran is designed to deliberately and indiscriminately target innocent civilians with the aim of creating suffering and hardship, as well as stoking social unrest in accordance with the flawed policy of regime change,” Takht-Ravanchi said at a meeting of the UN General Assembly's sixth committee on counter-terrorism on Thursday evening.

"The Islamic Republic of Iran strongly condemns terrorism in all its forms, including state terrorism and economic and medical terrorism, which are carried out through unilateral coercive measures," he added.

Earlier in the day, the US Treasury Department defied Europe’s humanitarian objections and targeted Iran’s financial sector by imposing sanctions on 18 Iranian banks with the aim of cutting off the Islamic Republic from the world's financial system.

Despite claims made by the US Treasury that the sanctions will not apply to transactions for the provision of agricultural commodities, food, medicine or medical devices to Iran, European diplomats have asserted that US sanctions will have dire humanitarian consequences.

Takht-Ravanchi went on to say that terrorizing nations has long been  a major global challenge for the international community, as it kills countless innocent people and at the same time leads to devastating consequences for the stability and security of nations.

Underlining that the coronavirus pandemic has changed the health condition of many communities, the Iranian diplomat said the imposition of US laws and regulations with an extraterritorial impact on my country and other countries is, by definition, tantamount to terrorism, which has severely exacerbated general health conditions during the epidemic.

The new sanctions come in blatant defiance of growing international calls for Washington to ease its Iran sanctions, which have severely prevented the country’s access to lifesaving medical data-x-items as the world is grappling to contain the deadly virus.

Last month, President Hassan Rouhani of Iran condemned the US sanctions amid the global pandemic, saying the White House knows nothing about humanity.

Iran has been battling the deadliest pandemic the world has seen in many decades amid  sanctions.

The new coronavirus, which erupted in the Chinese city of Wuhan in late December before spreading to the whole world, has so far infected more than 488,000 people and claimed some 28,000 lives in Iran.

Elsewhere in his remarks, the Iranian envoy to the UN referred to the US assassination of Iran’s top anti-terror commander Lieutenant General Qassem Soleimani and said the brutal and cowardly act was a “clear example of state terrorism” in gross violation of the fundamental principles of international law.

General Soleimani, former commander of the Quds Force of Iran’s Islamic Revolution Guards Corps (IRGC), was assassinated in a US airstrike at Baghdad airport on January 3, along with Abu Mahdi al-Muhandis, the second-in-command of Iraq’s Popular Mobilization Units (PMU) counter-terrorism force, and a number of their companions.

The strike came while General Soleimani was on an official visit to the Iraqi capital.

Both commanders were extremely popular because of the key role they played in eliminating the US-sponsored Daesh terrorist group in the region, particularly in Iraq and Syria.

Stressing that the targeted killing by the US was a great gift to Daesh and other terrorist groups in the region, Takht-Ravanchi said the Islamic Republic has been at the forefront of the fight against terrorism, especially in countering and eliminating Daesh and other UN-designated terrorist groups that receive financial and material support from certain countries in the region and beyond.

“It is a proven fact that the United States is spreading terrorism not only in our region but almost everywhere in the world,” he said.

“The United States has contributed to the creation of terrorist groups such as al-Qaeda and Daesh through its interventionist policies in our region,” he added. “The country continues to train and supply weapons and explosives to its terrorist agents and partners, including PJAK, Tondar and Jaish ul-Adl, to carry out terrorist attacks in Iran.”