TEHRAN (defapress) – A senior IRGC commander assured people of full security in the northwestern border areas near the Republic of Azerbaijan and Armenia after a number of shells fired during the Nagorno-Karabakh fighting hit the Iranian soil.
News ID: 82356 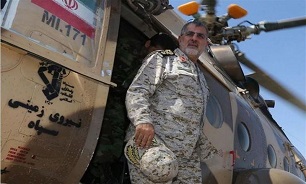 Commander of the Islamic Revolution Guards Corps Ground Force Brigadier General Mohammad Pakpoor on Friday visited the border regions near Khoda-Afarin county in the province of East Azarbaijan, after several rockets fired by the Azeri and Armenian forces fell on Iranian villages and farms there.

“Although a number of shells fired in the Karabakh dispute have hit the Iranian soil, security prevails along the borders and there is no threat to the country,” the general said.

Last week, Iran’s Foreign Ministry warned the warring parties in the Nagorno-Karabakh conflict that Tehran will not remain indifferent if the shells fired in the fighting continue to hit Iranian territories.

Tens of mortar shells fired by the warring sides in the latest round of fighting between Armenia and Azerbaijan have hit border rural areas of Iran in recent weeks.