Pakistan to mull over aspects of lifting Iran’s arms embargo 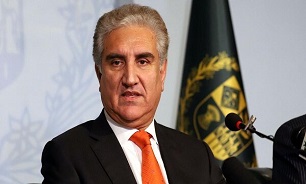 Speaking in an interview with IRNA on Sat. on the sidelines of commemoration ceremony of 75th establishment anniversary of UN in Islamabad, Makhdoom Shah Mahmood Hussain Qureshi emphasized on very close relations between Pakistan and Iran and reiterated that Islamabad is mulling over aspects of ending UN arms embargoes pertinent to the Islamic Republic of Iran.

Iran’s sanctions include two types of sanctions: one is related to the United Nations and the other is the unilateral sanctions imposed by the United States against Iran, he said, adding, “This is while that US sanctions on Iran still remain in place.”

Regarding Pakistan’s position on ending Iran’s arms embargo by the United Nations, Pakistan foreign minister stated, “Concerning the Joint Comprehensive Plan of Action (JCPOA), we are witnessing differences between the United States and other JCPOA members.”

He stressed that Pakistan is a responsible country and is well aware of its international obligations and will never violate any international sanctions.

He pointed out that Islamic Republic of Iran is Pakistan’s neighboring country and the two countries have historical and close relations, which dates back to many years ago, adding, “Thus, Islamabad takes all these features into consideration seriously.”

In his reaction to the lifting of UN arms embargoes imposed on Iran, Pakistan Foreign Minister Shah Mahmood Qureshi yesterday said that Islamabad wants to continue its cooperation with Tehran in all fields.