TEHRAN (defapress) – Iran’s First Vice President Eshaq Jahangiri lauded an end to the tenure of US President Donald Trump and his belligerent team, hoping that the next US administration would abide by the law and respect the other countries.
News ID: 82487 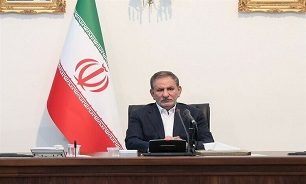 “Finally, with the announcement of the results of US elections, the era of Trump and his adventurous and belligerent team came to an end,” Jahangiri said in a post on his Twitter account late Saturday.

“Violation of international treaties, from environment to economic and inhumane sanctions against the Iranian nation, and support for terrorism and racism formed the basis of Trump’s policies,” he noted, Press TV reported.

The Iranian nation stood up to Trump’s “maximum pressure” policy, and will not forget the pains caused by “the massive disruption of its livelihood, the patients’ lack of access to medicine, and the assassination of the dear General Soleimani,” Jahangiri added.

“I hope we will see a change in the destructive policies of the United States, and its return to law and international commitments and respect for nations,” he added.

Democratic candidate Joe Biden has become the projected president-elect of the US, the Associated Press and other media outlets said on Saturday night.

Trump, however, has repeated unfounded voting fraud claims and said Biden is “rushing to falsely pose as the winner”.