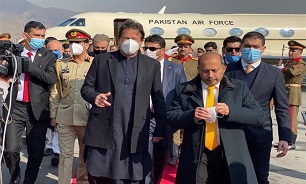 Khan landed in Kabul on Thursday for his first visit to Pakistan’s northwestern neighbor, where it has been facilitating peace talks between the government and the Afghan Taliban.

Graan Hewad, spokesman for the Afghan Foreign Ministry, said that the visiting prime minister would share his views with the Afghan leadership about Islamabad’s role in the peace process.

Earlier a Pakistani statement said that the focus of the talks would be “on further deepening the fraternal bilateral relations between Pakistan and Afghanistan, the Afghan peace process, and regional economic development and connectivity”.

Khan is accompanied by Foreign Minister Shah Mehmood Qureshi and his adviser on commerce and investment, Razzaq Dawood.

In October, Pakistan also hosted Gulbuddin Hekmatyar, the leader of the Hizb-e-Islami, an armed group that laid down weapons in 2016.