Biden Poised to Nominate Antony Blinken as US Secretary of State

TEHRAN (defapress) – US President-elect Joe Biden is poised to nominate Antony Blinken to serve as US secretary of state, people familiar with the matter told CNN, elevating a longtime foreign policy adviser as Biden makes his first round of Cabinet announcements Tuesday.
News ID: 82612 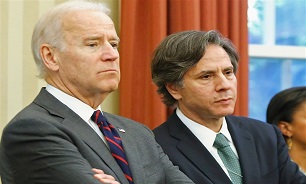 Incoming White House chief of staff Ron Klain said earlier Sunday that Biden intended to begin revealing members of his Cabinet Tuesday. Blinken is expected to be among the first nominations, people familiar with the matter said, with Biden intent on sending a signal that rebuilding America's alliances is one of his top priorities.

Bloomberg was first to report that Biden intends to name Blinken.

In that time, he played a central role in much of the Obama administration's foreign policy, including how to respond to Russia's incursion into Crimea in 2014, the raid to kill Osama Bin Laden in 2011 and the so-called fight against Daesh.

If confirmed by the Senate, Blinken will be tasked with repairing relationships with close allies across the globe, many of whom have bristled at President Donald Trump's confrontational style and attempts to remake the United States' international responsibilities at part of his "America First" campaign pledge. The longtime foreign policy adviser will also be asked to address a State Department dramatically altered under Trump, including staffing up an organization that was subject to a hiring freeze and combating a baseless view pushed by Trump that the agency was part of a "deep state" working against the Republican leader.

Prior to the Obama administration, Blinken worked as the Democratic staff director to the United States Senate Foreign Relations Committee, which Biden chaired.

During the Clinton administration, he served as a member of the National Security Council staff at the White House and held roles as the special assistant to the president, senior director for European affairs, and senior director for speechwriting and then strategic planning. He was Clinton's chief foreign policy speechwriter.

"Tony was a terrific deputy secretary. He is brilliant and kind and would be a wonderful and very effective leader of what will have to be one of the most monumental tasks in diplomacy, cleaning up the stables after the worst president and secretary of state we have ever had," he said.

A current State Department official told CNN that Biden "couldn't have picked a stronger choice to demonstrate his commitment to diplomacy and the diplomatic corps, much less the partnerships and alliances that make us strong."

Sen. Chris Coons of Delaware and former UN ambassador and national security adviser Susan Rice had been among the other contenders for the post.

Linda Thomas-Greenfield is the leading contender for the position of ambassador to the United Nations, sources familiar with the matter told CNN, which is also expected to be announced Tuesday.

Thomas-Greenfield, an African-American woman with a lengthy career in Foreign Service, previously served as assistant secretary for the Bureau of African Affairs. The selection of Thomas-Greenfield would help Biden honor his pledge to build a diverse administration.

Axios first reported the possibility of Thomas-Greenfield being nominated.

The transition team has also already assigned advisers -- known as sherpas — to help guide their nominated Cabinet members for the confirmation process, one source said.