TEHRAN (defapress) – Iran’s President Hassan Rouhani described the termination of “Trumpism” as a testimony to the Iranian nation’s victory in an economic war imposed by the US government.
News ID: 82626 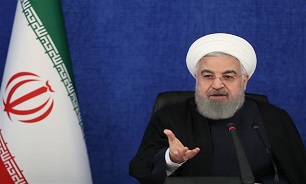 Speaking at a cabinet session on Wednesday, Rouhani praised the Iranian people for withstanding the economic war that the administration of outgoing US President Donald Trump intensified over the past three years.

“One of the major signs of the Iranian nation’s victory and the definite and certain defeat of the enemy in this economic war is an end to the era of Trumpism,” he added.

The president also urged the next US administration to make up for its predecessor’s mistakes and all wrong measures that have harmed the US image in the world.

“We hope that the next US administration would in the first step condemn Trump’s policies on Iran as well as his anti-human rights and terrorist measures explicitly, and would make up for the wrong policies that the (current US) administration has adopted over the past four years,” Rouhani added.

“If the next American statesmen have such a determination, I think settlement of the problem will be quite easy.”

Rouhani stressed that Washington’s return to the situation before inauguration of Trump as the US president would offer a “major solution to many problems”, change the conditions, and allow for the start of the next stages in various sectors.

In remarks a few weeks ago, Rouhani said the next American administration will have no option but to surrender to the Iranian nation, regardless of who would win the US presidential battle.

The Iranian administration has already made it clear that its political and economic decisions do not hinge on the US policies.