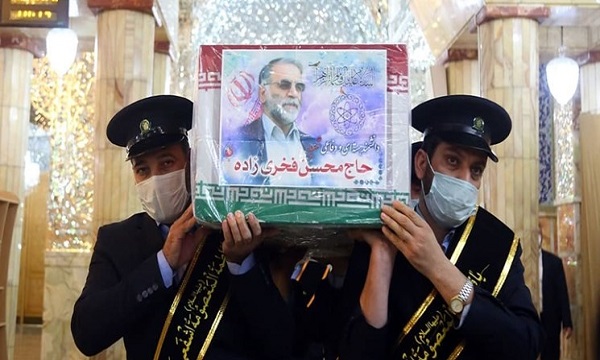 Rezayee who was speaking in a press conference in Tehran after an EC meeting with participation of Chief of Staff of the Iranian Armed Forces Major General Mohammad Hossein Baqeri, quoted General Baqeri as saying that the weapon which martyred Fakhrizadeh belonged to the NATO.

“Major General Baqeri explained about the security situation and the way that our nuclear scientist was martyred and said the weapon used was linked to the NATO army,” he added.

“General Baqeri also said that investigations to find the perpetrators have made good progress and the results will be reported to the people soon,” Rezayee said.

Iranian nuclear scientist Mohsen Fakhrizadeh's car was targeted by an explosion and machinegun fire in Damavand's Absard 40 kilometers to the East of Tehran on November 27.

The nuclear scientist and one of his companions were immediately taken to a nearby hospital but he could not be saved.

Iranian Foreign Minister Mohammad Javad Zarif tweeted that the assassination bears all the hallmarks of the Israeli regime.

An informed source had earlier told Press TV that the remains of the weapon used in the assassination of senior nuclear scientist Mohsen Fakhrizadeh show that it was made in Israel.

Israel has been an important partner to NATO for more than 20 years, as well as an active member of NATO’s Mediterranean Dialogue.

The history of Tel Aviv’s sabotage targeting Iran’s nuclear energy program is as old as the program itself.

Many observers believe Israel is not able to carry out such dangerous operations without the prior information and support of the United States which left a landmark nuclear deal with Iran in 2015.

Secretary of Iran’s Supreme National Security Council (SNSC) Ali Shamkhani said that electronic equipment has been used in the “highly complicated” assassination of Fakhrizadeh, and further underlined the role of Israel and the anti-Iran Mojahedin-e Khalq Organization (MKO, also known as the MEK, PMOI and NCRI) in the terror attack.

“Unfortunately, the operation was very complicated and was carried out by using electronic equipment and no one (terrorist) was present on the scene. But some clues are available, and the identity and records of the designer of the operation has been discovered by us,” Shamkhani said.

“Certainly, Monafeqin (hypocrites as MKO members are called in Iran) have played a role and certainly, the Zionist regime and Mossad are the criminal mastermind of this incident,” he added.

Early in 2018, the Israeli sources had acknowledged that Mossad had tried to assassinate an Iranian nuclear scientist, but its operation failed.

According to Fars News Agency, Mossad had gained access to Fakhrizadeh's name via a UN list which referred to him as a senior scientist of Iran's Defense Ministry's Physics Research Center.

After the terrorist attack, Commander of the Islamic Revolution Guards Corps (IRGC) Major General Hossein Salami underlined that assassination of Fakhrizadeh may not undermine Iranians' resolve, and said revenge for the terror attack is already on the country's agenda.

General Salami extended condolences to Supreme Leader of the Islamic Revolution Ayatollah Seyed Ali Khamenei, martyr Fakhrizadeh's family, and the Iranian nation over the martyrdom of Head of the Research and Innovation Organization of Iran's Defense Ministry, Dr. Mohsen Fakhrizadeh, who was assassinated in an organized and pre-planned terrorist attack by the child-killing Israeli regime.

"The enemies of the Iranian nation, specially the masterminds, perpetrators and supporters of this crime, should also know that such crimes will not undermine the resolve of the Iranians to continue this glorious and power-generating path, and harsh revenge and punishment is on agenda for them," the IRGC chief commander stressed.

Also, Ayatollah Khamenei in a message condemned assassination of Fakhrizadeh, ordering officials to take action to punish the masterminds and perpetrators of the terror attack.

“Mr. Mohsen Fakhrizadeh, a prominent nuclear and defense scientist of the country, was martyred by criminal and cruel mercenaries. The unique scientific figure gave his dear and precious soul in the way of God for his great and lasting scientific efforts, and the high position of martyrdom is his divine reward,” Ayatollah Khamenei said in his message.

“Two important issues should be seriously put on the agenda by all relevant officials; first, probing the crime and the definite punishment of those who perpetrated and ordered it; and second, pursuing and continuing the martyr's scientific and technical efforts in all the sectors in which he was engaged,” he added.

Ayatollah Khamenei also extended his condolences to martyr Fakhrizadeh’s family, students and the scientific society of the country, wishing him the highest position before God.

“All think-tanks and enemies of Iran should know well that the Iranian nation and officials are too brave and too couragous to leave this criminal act unanswered,” Rouhani said, addressing a meeting of the national coronavirus campaign headquarters in Tehran.

“The relevant officials will give a response to their crime in due time, and in addition, the Iranian nation is too wise and too smart to fall into the trap of the Zionists’ plot,” he added.

President Rouhani said that it seems some parties are after stirring chaos but “they should know that we are aware of their plots and they will not succeed in attaining their malicious goals”.

“The Zionist regime and those standing against Iran should know that the path of the country’s development and research will be paved rapidly” and a large number of other Iranian scientists like Fakhrizadeh will emerge to help, he added.

Iranian nuclear scientists have been the target of the western and Israeli spy agencies' assassination attempts in recent years.

In June 2012, Iran announced that its intelligence forces had identified and arrested all terrorist elements behind the assassination of the country's nuclear scientists.

"All the elements involved in the assassinations of the country's nuclear scientists have been identified and arrested," Iran's Intelligence Ministry announced in a statement.

"A number of countries, whose territories and facilities had been misused by the Mossad-backed terrorist teams, have provided the Iranian officials with relevant information," the statement added.

"Over the course of the investigations, all other elements behind the assassinations of the Iranian scientists Massoud Ali-Mohammadi, Majid Shahriari and Mostafa Ahmadi Roshan as well as Reza Qashqaei (Roshan's driver) have been apprehended," the statement read.

"Some of the perpetrators of the assassination of Dr. Fereidoun Abbasi, the current head of Iran's Atomic Energy Organization, are among those arrested," the ministry added.

According to the statement, Iran's Intelligence Ministry had detected some of Mossad's bases within the territories of one of Iran's Western neighbors, which provided training and logistical support to the terrorist networks.

In the fifth attack of its kind in two years, terrorists killed a 32-year-old Iranian scientist, Mostafa Ahmadi Roshan, and his driver on January 11, 2012.

The blast took place on the second anniversary of the martyrdom of Iranian university professor and nuclear scientist, Massoud Ali Mohammadi, who was also assassinated in a terrorist bomb attack in Tehran in January 2010.

The assassination method used in the bombing was similar to the 2010 terrorist bomb attacks against the then university professor, Fereidoun Abbassi Davani – who became the head of Iran's Atomic Energy Organization - and his colleague Majid Shahriari. While Abbasi Davani survived the attack, Shahriari was martyred.

Another Iranian scientist, Dariush Rezaeinejad, was also assassinated through the same method on 23 July 2011.

In a relevant development in January, 2015, the Islamic Revolution Guards Corps (IRGC) announced that it had thwarted an attempt by the Israeli intelligence forces to assassinate an Iranian nuclear scientist.