TEHRAN (Defapress) - Supreme Leader of the Islamic Revolution Ayatollah Seyed Ali Khamenei once again underlined Iran's resolve to punish all those who have perpetrated and masterminded the terror attack on former IRGC Quds Force Commander Lieutenant General Qassem Soleimani, but said Tehran's response would not be confined to one direct military action.
News ID: 82764 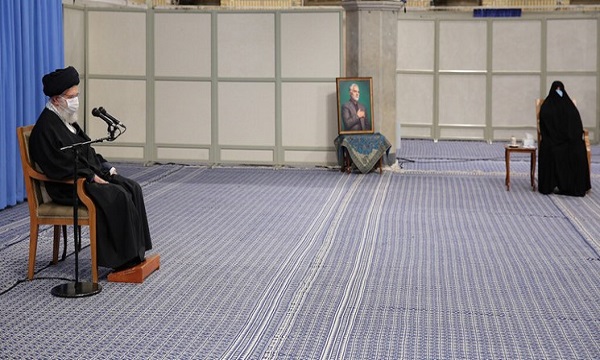 “The unforgettable funeral ceremony of martyrs Soleimani and Abu Mahdi al-Muhandis (deputy commander of Iraq's Popular Mobilization Forces) in Iran and Iraq in which millions of people participated, and the commemoration ceremonies of these two martyrs, astonished the generals of the arrogant powers’ soft war and was the first strong slap across the face of the Americans,” Ayatollah Khamenei said at a meeting with organizers of the commemoration ceremonies to be held to mark General Soleimani's assassination also attended by his family members in Tehran on Wednesday.

Ayatollah Khamenei referred to the missile attacks on the US base of Ein al-Assad in Iraq after General Soleimani’s martyrdom, and said that the harsher slap is supremacy over the enemy in software issues and expulsion of the American forces from the region which needs the nations’ efforts and policies of the resistance front.

He added that these slaps are different from retaliation, noting that the perpetrators and masterminds of General Soleimeni’s assassination should be punished and retaliated and “this retaliation is definite whenever possible”.

Ayatollah Khamenei, meantime, said that the murderers of General Soleimani are not worth even as much as his shoes.

“The entire world admits that the US has not attained its goals in Syria, and specially Iraq, and the great hero of this big job is General Soleimani which was fulfilled during his life,” he added.

Elsewhere, Ayatollah Khamenei advised the Iranian officials not to trust the enemy, reminding them that the administration of former US democrat President Barack Obama also showed many hostilities towards the Iranian nation.

He added that the three European states, Britain, France and Germany, which participated in nuclear talks with Iran, also displayed maximum hypocrisy and lack of action in implementation of their nuclear deal undertakings.

“Lifting sanctions is up to the enemy but nullifying them is up to us,” Ayatollah Khamenei said.

“We must be strong in all areas, including economy, science, technology and defense, because as long as we do not grow strong, the enemies will not give up greed and aggression,” he added.

The airstrike also martyred al-Muhandis. The two were martyred in an American airstrike that targeted their vehicle on the road to the airport.