TEHRAN (Defapress) - Ayatollah Khamenei rejected the Western powers’ call on Iran to pursue submissive diplomacy in the West Asian region, saying that the IRGC Quds Force is the main pillar of Iran’s independent diplomacy in the region.
News ID: 83296 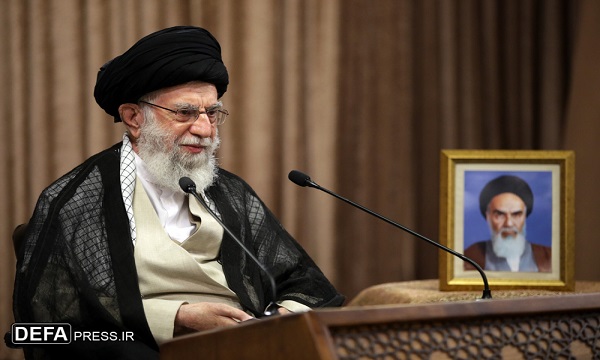 The Leader of the Islamic Revolution Ayatollah Seyyed Ali Khamenei delivered a live televised speech on the occasion of the National Teachers' Day and International Workers' Day (May Day).

The 12th day of Ordibehesht, the second month on the Iranian calendar, which fell on May 2 this year, has been designated as Teachers' Day in Iran to commemorate the martyrdom of Ayatollah Morteza Motahari, an Iranian cleric, philosopher, lecturer, and politician on May 1, 1979.

Ayatollah Khamenei first elaborated on the divine nature of the life of the first infallible Imam of the prophet household Imam Ali, saying that Muslims and non-Muslims all respect Imam Ali for his outstanding way of life and have taken him as a role-model.

He added that Imam Ali used to pay close attention to the lives of the poor and the oppressed people.

The Leader also said that Imam Ali had thirst for martyrdom, adding that Imam Ali was martyred while he was praying in the mosque.

Elsewhere, the Leader praised Martyr Motahri as a true philosopher and jurisprudent. It is noteworthy that National Teachers Day coincides with the Martyrdom of Martyr Motahari.

The Leader said that Martyr Motahari launched a loft struggle against the monarchical regime of Pahlavi.

He also called on the government to pay more attention to the livelihood of the teachers, saying that the dignity of the teachers should be protected.

He went on to say that Iran enjoys great capabilities to offer free education on large scale thanks to the Islamic Revolution.

He also appreciated the efforts that teachers made during the Covid-19 pandemic.

The Leader went on to touch upon International Labor Day and praised the major role that Iranian workers have played in domestic production.

Ayatollah Khamenei called for supporting the rights of the working class, saying that the health, job security and well-being of the workers should be addressed.

He said that the insurance and housing for workers should be provided to the working class, calling for large-scale planning to enhance the livelihood of the workers.

The Leader further called for promoting domestic production in a way to nullify the sanctions.

Elsewhere, he addressed the topic of the upcoming presidential elections in the country, warning against the ill-wishers that seek to frustrate the people with the elections.

He went on to call for a high turnout in the votes to defend the nation.

The Leader of the Islamic Republic of Iran hailed the role that the IRGC Quds Force plays in advancing the country’s securing national interests, saying that this force forms the main pillar of Iran’s diplomacy in the West Asia region.

He praised the IRGC Quds Force as the biggest factor in preventing the pursuit of submissive diplomacy in the West Asian region.

The Leader said that the Westerners want the country's foreign policy to be under their control, underlining that in no country, foreign policy is determined by the foreign ministry.

He further explained that the Foreign Ministry is only in charge of carrying out the foreign policy, not the decision-maker.