TEHRAN (Defapress) - The military wing of Hamas announced the firing of 15 rockets towards the area of Dimona, southern occupied Palestine.
News ID: 83339 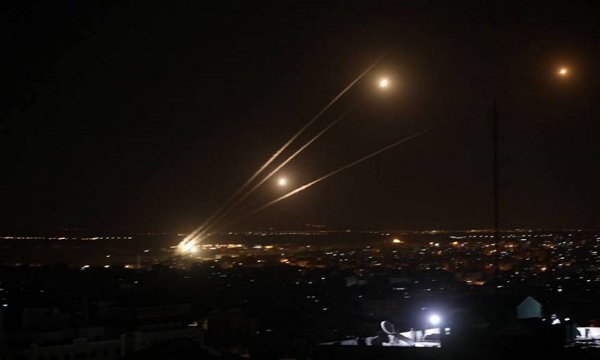 There are also reports by Israeli media saying that since the new conflict began between Israeli regime and the resistance forces, there are cyber-attacks against the Israeli websites going on.

According to reports, the Israeli websites get hacked by the resistance forces’ hackers.

An Israeli cybersecurity authority has told media, that as tensions escalate between Israel and pro-Palestinian groups carry out major cyber-attacks against Israeli websites, and usually Palestinian slogans replace the data on the front pages of Israeli pages.

Qassam Brigades have said in a statement that it fired 130 rockets towards Ashkelon, Netivot and Sderot in response to the martyrdom of its commander and the demolition of the Al-Shorouk Tower.

Zionist media are also reporting that there is a power outage following the rockets attacks on Sderot.

A Zionist has been killed in rocket attacks on Sderot, according to local sources.

Spokesman of Palestinian Islamic Resistance Movement (Hamas) Mohammad Hamadeh addressed Palestinians and stated, “Your move towards Al-Aqsa Mosque, Pact of Loyalty, with the blood of martyrs in Gaza emphasizes the continuation of the path to liberation and means that you will never leave Al-Aqsa Mosque alone.”

Al-Qassam Brigades, the military wing of Hamas, said in a brief statement that it had fired 50 rockets at the occupied Ashdod.

Palestinian sources reported that sirens went off warning of rocket attacks for the second time in Ashdod and Ashkelon.

The military wing of the Popular Front for the Liberation of Palestine (PFLP) also said in a brief statement that it had fired several rockets at Ashdod at the same time as Al-Qassam's rocket attack.

Palestinian sources reported that a large number of rockets were fired at Ashdod and Ashkelon.

Al-Qassam also stated that the Zionist regime's gas platform near the Gaza coast was targeted by a rocket attack.

The attack comes as Palestinian media reported moments before the resumption of Resistance rocket attacks on Zionist settlements.

According to Zionist sources, five Zionists were killed and more than 100 were injured in Resistance rocket and missile attacks in various parts of the occupied territories.

Sirens go off warning of rocket attacks at Ashdod, Ashkelon

The sources reported a large-scale rocket attack on the occupied city of Ashkelon in the northern Gaza Strip this afternoon.

Al-Mayadeen reported that sirens went off warning of rocket attacks at Zionist settlements of Ashdod and Ashkelon.

Palestinian sources published a photo of the occupied city of Ashkelon, where one of the missiles hit a target in the city.

Zionist TV Channel 11 reported that for the first time since 5 a.m. today, the Resistance forces have resumed their rocket attacks on Ashkelon and Ashdod.

In separate statements, the Israeli prime minister and war minister threatened Palestinian resistance groups in the Gaza Strip, saying they are stepping up attacks in the region.

Israeli Prime Minister Benjamin Netanyahu and War Minister Benny Gantz reacted to the targeting of an Israeli army jeep with anti-tank missiles from the Gaza Strip.

According to Al-Jazeera, Netanyahu threatened in a radio interview that the Israeli army would expand attacks against Gaza.

The Palestinian Ministry of Health announced on Wednesday that the number of martyrs in the Israeli airstrikes on the Gaza Strip increased to 43.

As a result of these attacks, 296 people have been injured so far. 13 children are said to be among the Palestinian martyrs.

Zionist fighters once again targeted areas of the Gaza Strip moments ago.

Zionist fighters also targeted a civilian vehicle in the northern Gaza Strip on Wednesday. The initial reports indicate that one person killed in this regard, Al-Mayadeen reported.

In the new Israeli airstrike, targets in the northwest and northeast of Gaza have been bombed.

Al-Mayadeen reported that the Zionist regime fired three missiles at the northeastern region of Gaza.

Meanwhile, Zionist media reported that a missile had been fired from Gaza towards occupied territories and that sirens went off warning of rocket attacks at Zionist settlements near Gaza.

Palestinian sources also reported the attack of a Zionist regime drone on a civilian vehicle in the Gaza Strip and the martyrdom of several Palestinians.

A Palestinian source said that the Zionist regime had rejected the UN envoy's proposal for a ceasefire.

The Palestinian source said today that Special Representative to the Middle East Peace ProcessTor Wennesland had offered a ceasefire to the Zionist regime and Hamas, but Tel Aviv did not accept it.

According to the Arab 48 website, the Palestinian source, who did not want to be named, said that Hamas had also rejected the UN envoy's request because the Zionist regime had not accepted the ceasefire plan.

According to the source, Wennesland has proposed an immediate ceasefire plan, saying that if the conflict does not stop, the situation will turn into a full-scale war.

The Zionist regime's security cabinet once again will hold an emergency meeting to review the situation in the Gaza Strip and the clashes with Palestinian Resistance groups.

New and widespread attacks by Palestinian resistance groups on Tel Aviv in the Gaza Strip have prompted the Zionist regime to hold another security cabinet meeting.

Zionist media reported today that the Israeli security cabinet will meet at 9 p.m. (local time) to discuss various plans for the situation in the Gaza Strip.

Israeli War Minister Bani Gantz also declared a state of emergency in the city of Lod, which is witnessing widespread protests and demonstrations by the Palestinians against the Zionist occupation.

Palestinian Interior Ministry spokesman Iyad Al-Bazm in Gaza said Zionist fighters had bombed and destroyed all police buildings in the Gaza Strip and the headquarters of the Internal Security Organization at a site known as "Arafat".

He explained that the site, which was targeted by Israeli airstrikes, houses police buildings, the Interior Ministry, Intelligence Ministry, passport offices, the education and security services, and police colleges and training centers.

Saraya al-Quds, the armed wing of the Palestinian Islamic Jihad movement announced today that it had targeted the cities of Tel Aviv, Ashkelon, Beersheba and Sderot with 100 missiles at 5 a.m. (local time).

According to Palestine Today, Saraya al-Quds added that it did so in response to the Zionist regime's attack on residential houses.

Al-Qassam Brigades, the military wing of Hamas, also announced that it had fired 210 missiles at the occupied Palestinian cities this morning in response to the Zionist regime's attacks.

According to Israeli Channel 13 television, Resistance forces in the Gaza Strip have fired about 1,000 rockets and missiles at various cities in occupied Palestine over the past three days.

According to the Wafa News Agency, the Palestinian Ministry of Health announced that the number of martyrs of the Israeli regime's attack on the Gaza Strip has reached 35, including 12 children and 3 women. The number of injured has also reached 233.

The Palestinian resistance movement Hamas had set a deadline for the Zionist military to leave Al-Aqsa Mosque by 6 o'clock local time Monday and free the Palestinians who have been arrested.

Clashes between the Palestinian resistance and the Zionist regime began on Monday after the deadline expired.