TEHRAN (Defapress) - After Ebrahim Raeisi won Friday's presidential elections in Iran, many political leaders and prominent figures in the region and the world offered their congratulations on his victory.
News ID: 83475 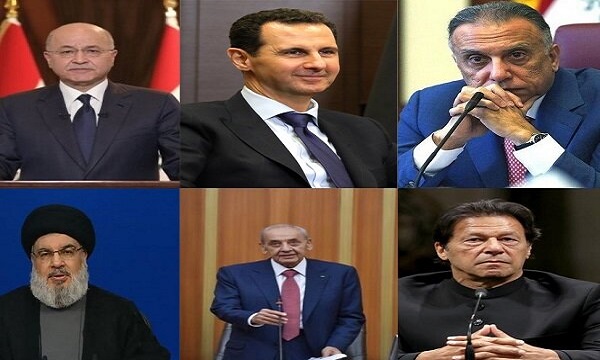 Shortly after Raeisi was announced the winner by preliminary results, political leaders started to send their congratulations to Raeisi on his landslide victory on Saturday.

In a message on Saturday afternoon, the President of Cuba Miguel Mario Díaz-Canel Bermúdez congratulated Ebrahim Raeisi on victory in the Iran presidential elections.

Sultan Haitham bin Tariq al-Said has also offered his congratulations to Iran president elect Ebrahim Raeisi for his victory in the Friday votes.

Ilham Aliyev, the President of Republic of Azerbaijan, also congratulated victory of Ayatollah Raeisi.The Azeri president said in his message that there are many opportunities for the development of bilateral relations and regional cooperation between the two countries.

Sheikh Mohammed bin Rashid Al Maktoum, the Vice President and Prime Minister of the United Arab Emirates (UAE), its Minister of Defence, and ruler of the Emirate of Dubai has also offered his congratulation on Raeisi’s victory in the elections.

In a message on Saturday, Leader of the National Wisdom Movement of Iraq Seyyed Ammar al-Hakim, congratulated the Leader of the Islamic Revolution, as well as the Iranian nation and government on the 13th presidential elections in Iran as democratic experience.

President Armen Sarkissian sent a congratulatory message to Raeisi on Saturday, saying that he believes in Raeisi's ability to continue Iran's path of prosperity and progress during his tenure.

Turkey's President Recep Tayyip Erdogan also congratulated to Raeisi and wished prosperity to the Iranian people. He also said he would be pleased to visit Iran soon after the end of Covid-19 pandemic.

The Speaker of the Lebanese Parliament, Nabih Berri, sent a congratulatory message to the Leader of the Islamic Revolution Ayatollah Khamenei on the successful holding of the elections, saying that "Iran showed once again its greatness in holding elections, just as it has shown its greatness in resisting the sanctions."

On his Twitter account, Pakistani Prime Minister Imran Khan offered his congratulations to Ayatollah Raeisi on his victory in the 13th Iranian presidential election.

Head of the Palestinian resistance movement Hamas Ismail Haniyeh addressed the Leader of the Islamic Revolution in his message, saying that on behalf of Hamas. His message reads "We in the Hamas Islamic Resistance Movement in Palestine sincerely congratulate Ayatollah Khamenei, the Leader of the Revolution, and the Iranian people on the successful holding of the presidential election in which the Iranian people elected Seyyed Ibrahim Raeisi as the new President."

Iraqi President Barham Salih was one of the first regional leaders who sent his congratulations to Raeisi for his victory. Raeisi is reported to have invited Iraqi prime minister to visit Iran.

Russian President Vladimir Putin took the lead to offer his congratulations on Raeisi's victory. In his message, Putin expressed Russia's readiness to cooperate fully with the elected government.

Putin also expressed hope that the two nations of Iran and Russia would keep moving toward closer constructive cooperation.