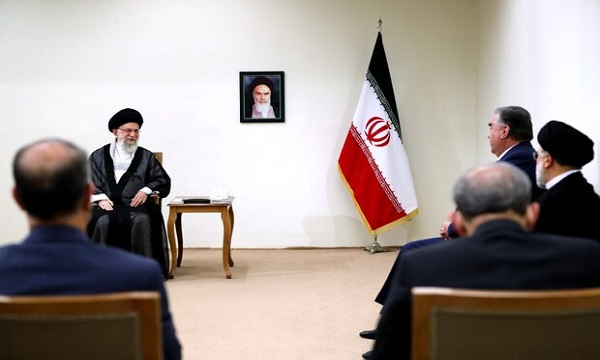 The President of the Republic of Tajikistan, Emomali Rahmon, and his accompanying delegation met with the Leader of the Islamic Revolution, Ayatollah Seyyed Ali Khamenei in Tehran on Monday.

In the meeting, the Leader of the Islamic Revolution, Ayatollah Seyyed Ali Khamenei said that the new administration has adopted a regional and friendly countries-focused foreign policy, adding that Iran and Tajikistan enjoy having great potentialities to increase their bilateral relations level.

"In order to use these capacities and seriously expand cooperation, the Joint Commission must seriously plan and schedule all the signed documents to reach the operational stage," he underscored.

Ayatollah Khamenei also welcomed the visit of the Tajikistan president to Iran as a positive step towards enhancing relations to the favorable level.

"Iran's four-season climate and vast lands and plains, as well as scientific, technological and industrial progress and knowledge-based companies on the Iranian side, and abundant water resources and massive mineral resources in Tajikistan, lay the necessary ground for promoting joint cooperation," he went on to point out.

Ayatollah Khemenei went on to stress that "The sanctions are world powers’ weapon and the only way to counter them is using domestic capacities."

Emphasizing that one of the areas of cooperation and consensus between Iran and Tajikistan is regional issues, especially the situation in Afghanistan, the Leader said that Iran and Tajikistan have shared concerns about Afghanistan and both countries are concerned about the spread of terrorism and the growth of Takfiri groups in that country. We believe that the men who are now in power in Afghanistan should be able to share power with all different groups in an inclusive government."

The Leader of the Islamic Revolution also referred to the recent visit of the Chief of General Staff of Iranian Armed Forces Major General Mohammad Hossein Bagheri to Tajikistan and the inauguration of a UAV factory in the central Asian country and noted that such cooperation is very important: "UAVs play a very important role in the security of different countries in today's world."

During the meeting, which was also attended by the President of Iran Ebrahim Raeisi, President Emomali Rahmon expressed great happiness with his presence in Tehran and meeting with the Leader of the Islamic Revolution, and then referred to his talks with the President of Iran earlier today and said, "Good talks were held in various fields, including trade, economic and industrial relations, and according to the signed documents, it is hoped that under your guidance, the relations between the two countries will expand more than before."

He cited security concerns, especially about Afghanistan and the spread of terrorism, as important issues between the two countries, adding, "We demand peace, tranquility and an inclusive government in Afghanistan with the participation of all different ethnic groups and we hope that the security concerns can be overcome by increasing security cooperation between Iran and Tajikistan."