US crime against humanity in Japan not forgettable

TEHRAN (Defapress) - People in the world will not forget August 6 and 9 which marks the anniversary of the atomic bombing of Hiroshima and Nagasaki by the US which took the lives of over 200,000 innocent civilians.
News ID: 84375 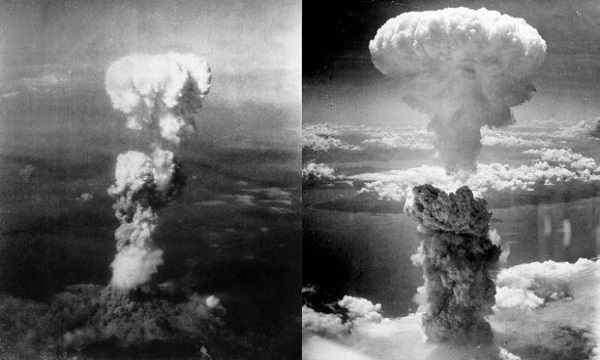 The US detonated two nuclear weapons over the Japanese cities of Hiroshima and Nagasaki on August 6 and 9, 1945, respectively, with the consent of the UK, as required by the Quebec Agreement. The two bombings killed between 129,000 and 226,000 people, most of whom were civilians, and remain the only use of nuclear weapons in armed conflict.

The anniversary of the atomic bombing of Hiroshima and Nagasaki is a reminder of America's great crime against humanity.

The Hiroshima incident reveals the fact that the US resorts to any inhumane efforts to achieve its illegitimate and irrational goals.

The memorial of the victims of this unfortunate event reminds the world of the need to seriously realize the ideal of a world free of nuclear weapons.

This shows the constant threat of such weapons always endangers international peace and security.

In memory of the tragedy, Leader of the Islamic Revolution Ayatollah Seyyed Ali Khamenei stated in a message on Apr 17, 2010, to International Conference on Nuclear Disarmament.

Ayatollah Khamenei noted that unfortunately, although many countries have made an effort to manufacture and amass nuclear weapons - which in itself can be considered a preface to committing crimes and has seriously jeopardized global peace - there is only one government that has committed a nuclear crime so far. Only the government of the United States of America has attacked the oppressed people of Hiroshima and Nagasaki with atomic bombs in an unfair and inhumane war, according to khamenei.ir.

Since the detonation of the early nuclear weapons by the US government in Hiroshima and Nagasaki created a human disaster of unprecedented proportions in history and exposed human security to a great threat, the global community has reached a unanimous agreement that it is necessary to completely destroy such weapons.

The use of nuclear weapons resulted not only in large-scale killings and destruction but also in the indiscriminate massacre of people - military members and civilians, young and old, men and women. And its anti-human effects transcended political and geographic borders, even inflicting irreparable harm on future generations. Therefore, using or even threatening to use such weapons is a serious violation of the most basic humanitarian rules and is a clear manifestation of war crimes.

From a military and security perspective, after certain powers were armed with this anti-human weapon, there remained no doubt that victory in a nuclear war would be impossible and that engagement in such a war would be an unwise and anti-human act.

However, despite these obvious ethical, intellectual, human, and even military realities, the strong and repeated urge by the global community to dispose of these weapons has been ignored by a small number of governments who have based their illusory security on global insecurity.

Elsewhere, Ayatollah Khamenei made the remarks on Nov. 20, 2013, at a meeting with fifty thousand Basiji commanders in attendance.

Ayatollah Khamenei noted that when the Americans feel like expressing regret for their attack on Japan, for the two bombs they blasted in Hiroshima and Nagasaki, they say, "Although tens of thousands or perhaps hundreds of thousands of people were killed, by the bombs that we dropped on these two cities, this was the price for ending World War II. If we (the Americans) had not dropped these nuclear bombs, the war would have continued. If we didn’t do it then two million people, instead of the two hundred thousand people who were killed, as a result, would have been killed. Therefore, we rendered a service by dropping these bombs”, Khamenei.ir reported.

Take note, that this is a common statement made by Americans (USA) in their official propaganda. 65 years have passed since that day but they repeat those very words.

It is a deceptive and hypocritical statement, one of the elaborate lies, which is not told by anyone except the supercilious regimes. On the Christian calendar date of 1945, during summer, a crime was committed when two nuclear bombs were dropped and devastated two cities in Japan. This is while four months before that event, in the early spring of 1945, the primary warmonger Hitler had committed suicide.

Moreover, the second most important constituent of the war, Italian president Mussolini, was arrested. The war was approaching its end. Japan too, which was the third important element of the war, announced that it was ready to surrender.

Therefore, the war was practically over, but these nuclear bombs were dropped regardless. Why? For experimentation purposes, these bombs had been built and they wanted to test them somewhere. Where were they going to test these weapons?

The “best decision” for the US was to drop these bombs on innocent people in Hiroshima and Nagasaki. They used war as a scapegoat, to do their experimentations, so results would clarify if these bombs work properly or not; such is their deceit.

"Westerners claiming human rights have the darkest record of human rights abuses in the world," said Ali Bagheri Kani in his meeting with the Japanese Ambassador to Tehran Aikawa Kazutoshi on Apr. 24, 2021.

Stating that the two nations of Iran and Japan are the biggest victims of weapons of mass destruction in the twentieth century, he added, "Hiroshima and Sardasht are clear symbols of American and European crimes against humanity, and therefore Iran and Japan are the most deserving countries to fight against weapons of mass destruction and defend the victims of these weapons."

"Tehran and Tokyo can develop a front by creating a global movement to disarm the weapons of mass destruction which will result in giving peace and security to the world," he added.

"Iran does not view human rights from a political perspective, so it welcomes any initiative to help improve the human rights situation in the world," he highlighted.

The Secretary-General of the High Council for Human Rights of the Islamic Republic of Iran Kazem Gharibabadi in a tweet on Aug.7, 2021, said that “the US is the first who used nuclear weapons, still develops its arsenal, and even threatens others to their use.”

He added that "to have a safe and secure world, nuclear weapons should be destroyed totally."

Iran's permanent envoy to the United Nations Majid Takht-Ravanchi on Sep. 8, 2021, emphasized that nuclear disarmament must remain on the agenda of the international system.

Speaking on the occasion of the commemoration ceremony of International Day against Nuclear Tests at the UN Headquarters, Takht-Ravanchi welcomed the enforcement of the Nuclear Non-Proliferation Treaty and stressed that nuclear disarmament must remain at the top of the international system, because, only nuclear disarmament and complete destruction of these weapons could guarantee for non-using these destructive weapons.

Referring to the 25th anniversary of signing the Comprehensive Nuclear-Test-Ban Treaty and the importance of this International Day in commemoration of victims of nuclear testing and environmental protection, he lashed out at the role of the US government in this regard.

Iran's UN envoy criticized that the United States has carried out the highest number of nuclear tests compared to other nuclear countries since 1945, conducting 1,054 nuclear tests out of a total of 2,000.

Unfortunately, at the regional level, the Zionist regime, with its weapons of mass destruction, is playing such a destructive role in the West Asian region, he said, adding, “We want the international community to compel the Zionist regime to adhere unconditionally to the treaty and accept IAEA oversight over its nuclear facilities."

Hiroshima commemorated the 77th anniversary of the atomic bombing that destroyed most of the city and killed as many as 220,000 people.

The United States has committed more crimes than any other country in history, and unfortunately, even though the US dropped atomic bombs on Hiroshima and Nagasaki, the United States never changed its policies toward other nations.

Iran has announced that all countries should make a commitment to nuclear disarmament and to eradicating all weapons of mass destruction.

77 years after the United States targeted Japan with nuclear weapons and brought about a humanitarian catastrophe, killing hundreds of thousands of innocent people in Hiroshima and Nagasaki, the US administration continues to commit crimes this time in Iraq, Afghanistan, Yemen, Syria, and so on.

UN Secretary-General Antonio Guterres said in a video message on the 77th anniversary of the atomic bombing of the two Japanese cities that the only way to eliminate the nuclear threat is to eliminate it.

The International Committee of the Red Cross (ICRC) warned on the occasion of the nuclear bombing that there are nearly 14,000 atomic bombs in the world, adding that each of them is far more powerful and destructive than the bombs that were dropped on Hiroshima and Nagasaki.

This month marks the 77th anniversary of the US atomic bombings of Hiroshima and Nagasaki. While proponents of the bombings have long justified them on the basis that they shortened World War II, the fact is that they were war crimes. The only reason why President Truman and the pilots who dropped the bombs were not prosecuted as war criminals is because the United States ended up winning the war.