Iran after Extensive Interaction with World 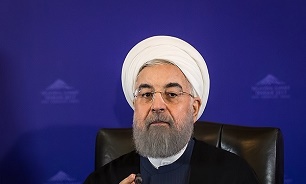 "..., widespread interaction with the world, especially with neighboring countries, is our strategic policy for the realization of growth, and in this framework, we welcome any ideas and mechanisms that will strengthen relations with the Russian Federation and the Republic of Azerbaijan,” Rouhani said in the second trilateral summit with his Russian and Azerbaijani counterparts in Tehran on Wednesday.

The three presidents discussed regional issues and mutual cooperation in the tripartite meeting.

Following is the full text of Rouhani’s speech at the meeting:

In the Name of Allah, the Most Beneficent, the Most Merciful

Your Excellency Mr. Ilham Aliyev, President of the Republic of Azerbaijan;

I sincerely thank you for accepting my invitation to attend this important meeting and welcome you to the Islamic Republic of Iran. Today, for the second time, we had this opportunity to hold a tripartite summit of presidents of Iran, Russia and Azerbaijan in Tehran. I am confident that today's meeting will be an important step in developing cooperation between the three countries, which has been developed more in recent years, and will create a clear vision for further consolidation and deepening of relations.

From our point of view, holding the first tripartite summit of the Islamic Republic of Iran, the Russian Federation and the Republic of Azerbaijan in Baku and the firm determination of the heads of the three countries to hold the second round of the summit in Tehran, as a positive and valuable initiative, is an important opportunity to express views and pursue relations within the framework of common interests.

The development of comprehensive and sustainable relations with neighboring countries is one of the most important priorities of the Islamic Republic of Iran's foreign policy. On the other hand, the Iranian economy, with its one-trillion-dollar growth potential over the next 20 years, can be one of the most promising emerging economies in the world. Therefore, widespread interaction with the world, especially with neighboring countries, is our strategic policy for the realization of growth, and in this framework, we welcome any ideas and mechanisms that will strengthen relations with the Russian Federation and the Republic of Azerbaijan.

Relations between Tehran and Moscow over the past years have had a positive trend in all areas. Cooperation and consultation of the Islamic Republic of Iran and the Russian Federation in resolving the nuclear issue of Iran, the implementation of the Joint Comprehensive Plan of Action (JCPOA) and continuation of peaceful nuclear cooperation, the fight against terrorism, the confrontation and management of the Syrian crisis, and the creation of the necessary conditions for the development of trade relations, including signing of several documents, such as the agreement for visa facilitation, customs cooperation, investment and cooperation in energy, transport, science and technology, has deepened the relations between the two sides and created a positive outlook for relations.

In recent years, Tehran and Baku have also taken good steps to develop relations, relying on being neighbors, mutual respect and mutual interests. The signing of the customs agreement, the electricity sale agreement, the agreement on connecting railway lines of the two countries, the construction of rail bridge on the border between the two sides are among the areas for development of trade and economic relations. Tehran has always called for the end of the Karabakh dispute in the region to resolve this issue by relying on mutual talks and diplomatic and peaceful solutions, and considers the recent meeting of Azerbaijani and Armenian leaders a positive step that can create stability and security.

From the point of view of the Islamic Republic of Iran, the tripartite interaction of Iran, Russia and Azerbaijan, beyond bilateral relations and in the form of a tripartite format, cannot only develop and strengthen existing capacities between the three countries in various political, security, cultural and economic fields, but also by creating convergence, it can provide new opportunities to address the challenges of the region. It is obvious that such arrangements are not against any country or a third party and should be taken advantage of through a win-win approach.

The Caspian Sea is the focal point for cooperation between the three countries and the place for the interests and convergence of our nations. This sea, which has brought us more solidarity, has rich oil, gas and water reserves and is a wealth of resources for all of us. The Caspian Sea is a sea of peace and cooperation, and it should remain to have this function. The promotion of environmental cooperation in the Caspian Sea region is a common task and duty of all littoral states.

The development of tripartite negotiations between the ministers of foreign affairs, taking advantage of the capacity of parliamentary diplomacy and coordination at international parliamentary meetings, cooperation and consultation in international institutions, and holding of tripartite summits of Iranian, Russian and Azerbaijani security officials to discuss common threats are among the necessary arrangements for development of political relations between the three countries.

Faced with theoretical developments, especially in the two areas of unilateralism and extreme nationalism, the international community is increasingly concerned about the growth of these thoughts and its presence in international decision-making. The nationalist interpretation of international understandings and agreements, and making global developments power-centered creates the greatest dangers in the field of relations between countries. Exiting agreements and multilateral commitments and the extreme emphasis on power-centred unilateralism will set a dark future ahead of us. If this trend is to dominate the world, then it will not be possible to overcome violations of commitments, because in the current situation in the region and the world, for reasons such as the complexity of the security threats and the transboundary nature of these threats, as well as the capacity of regional integration in the development of peace and improving the level of security, development and prosperity, the cooperation of governments is inevitable, and the Islamic Republic of Iran, while believing in the necessity of interaction and cooperation between states, is seeking its interests in cooperation with others, especially with neighboring countries and friends.

In addition to the need to take advantage of existing opportunities, holding such meetings and deepening the relations of the three countries can play an important role in dealing with common threats. We believe that complexity and transnational threats necessitate cooperation of governments to deal with them, and the recent developments in the region and the world are witness to the claim that through cooperation, interaction and understanding of mutual interests, it is possible to overcome many of the threats and challenges.

In the current era, challenges such as terrorism and extremism, destructive intervention of trans-national powers in the internal affairs of other countries, the political use of sanctioning instruments aimed at promoting illegitimate political goals, environmental problems, drug trafficking and the spread of transnational and cybercrime are among the common threats, for which cooperation and consultation of governments is the only way to manage and control. The Islamic Republic of Iran welcomes deepening of cooperation with the Russian Federation and the Republic of Azerbaijan in facing these challenges.

For the Islamic Republic of Iran, promoting security in the region is important in cooperation with other partners and in the fight against terrorist groups. It is also among our principles to emphasize political solutions to resolve various crises. This approach was considered in cooperation with the Russian government in facing with the Syrian crisis and we have been working to help establish peace and eliminate tensions in Syria through the continuation of the Astana talks.

Also regarding the Iraqi issue, preserving territorial integrity and unity of the country and cooperation with its central government in the process of combatting terrorism are considered vital for us and we believe that coordination of other actors in this regard will be very important, because the lack of cooperation in these areas can have devastating consequences for all countries in the region.

In the end, I would like to thank the honorable presidents and their delegations. I am confident that holding of this meeting will have an effective role in promoting regional cooperation and strengthening regional peace.