TEHRAN (defapress) – Parliamentary official Hossein Amir-Abdollahian said Sun. that US-backed terrorists in Syria are committing atrocities in the Arab country with the help of weapons gifted to them by the White House.
News ID: 68853 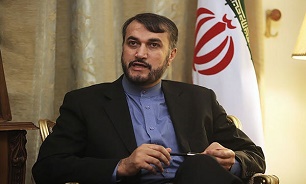 “The US-backed terrorists and armed groups in Syria claim one day to wish to be part of the government and sit down at the table for political talks, and the next day, they are back to bombarding the innocent Syrian people with weapons gifted to them by the White House,” Parliament Speaker Special Aide in International Affairs Hossein Amir Abdollahian said in a tweet on Sunday.

“This is a blatant example of double standards, the US policy of spreading enmity and toying with terrorism at the negotiating table,” he added.

Amir-Abdollahian was referring to the renewed violence in Syria's Eastern Ghouta, an area where militants have been using to launch mortar attacks on the Syrian capital Damascus, causing a critical humanitarian situation. Iranian deputy FM Araghchi said Friday that Iran was working closely with Syria in order to bring calm back to this area.

Meanwhile, Russia has called for a UN Security Council meeting to be held on the situation in Eastern Ghouta.

Eastern Ghouta is included in a deal between Turkey, Russia and Iran to establish de-escalation zones in Syria.