TEHRAN (defapress) – The secretary general of Lebanon’s Hezbollah resistance movement said US President Donald Trump knows no limits in his efforts to blackmail Arab states of the Middle East region through the Iranophobic language.
News ID: 73044 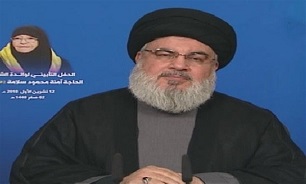 Addressing his supporters via a televised speech broadcast live from the Lebanese capital city of Beirut on Friday evening, Seyed Hassan Nasrallah said Trump’s latest remarks that Iran planned to take control of the Middle East in just “12 minutes” were meant to lure regional rulers into paying him exorbitant sums of money in return for preserving their regimes.

“As (the late founder of Iran's Islamic Revolution) Imam Khomeini said the US government is an administration of thieves. It is a regime of theft. Former US presidents were also thieves but did not perpetrate their misdeeds blatantly. The incumbent one, however, robs Arab leaders and humiliates them at the same time,” Nasrallah pointed out, according to Press TV.

“Trump shows no respect for ethics, human rights and justice in his remarks. We are witness to a US regime, which does not shy away from using the language of contempt and humiliating anyone, albeit it might be their friend and ally,” he said.

The Hezbollah chief further noted that Trump views the Islamic Republic of Iran as a great and strong establishment, while considers all Arab states buying billions of dollars worth of weapons from him as fairly feeble that cannot last on their legs for more than 12 minutes without his support.

“Trump is making use of the anti-Iran rhetoric in a bid to sell billions of dollars worth of American munitions and military hardware to Arab rulers,” he said.

Nasrallah then advised Arab leaders to reconsider their reliance on American statesmen, saying, “The United States is the same country, which denied the deposed Shah of Iran, Mohammad Reza Pahlavi, a visa for cancer treatment. This came despite the fact that he used to be a long-time US ally in the region.”

“Arab leaders would better allocate the billions of dollars that they are paying Trump to solve their own nations’ problems,” the Hezbollah secretary general commented.

He also scoffed at Israeli Prime Minister Benjamin Netanyahu’s allegations about Hezbollah’s secret weapons sites, stressing that his movement’s policy is to maintain vigilance and not to respond to such trumped-up charges.

“Denial of Israeli allegations would be a free favor to the Tel Aviv regime,” Nasrallah said.

Elsewhere in his remarks, the Hezbollah chief stated that he has on occasions demanded the quick formation of a new unity government in Lebanon.

“I assure you all that neither Iran nor Syria does interfere in the formation of the future Lebanese government,” Nasrallah concluded.