TEHRAN (defapress) – Deputy Coordinator of the Iranian Army said that US naval fleets in the Persian Gulf are under constant watch.
News ID: 74544 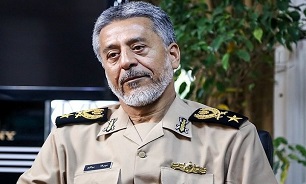 Iran monitors every ship that enters the region from the Indian Ocean and keeps watch on all their movements, Rear Admiral Habibollah Sayyari told IRNA on Tuesday.

“We will not let any movement [of enemies] in Iran’s territorial waters,” said the former Navy commander, adding, “the regional security can be ensured by the regional countries and there is absolutely no need for the help of others in providing security.”

Those who enter the region by the excuse of strengthening security, just undermine this factor wherever they go as they did in Syria, Iraq, and Afghanistan, he added.

On Friday, a US naval fleet including USS John C Stennis aircraft entered the Persian Gulf through Strait of Hormuz. This is the first US aircraft carrier entering the Persian Gulf after US unilateral withdrawal from Iran nuclear deal. The US fleet entrance into the region coincided with the IRGC military drills. According to reports, some 30 IRGC boats trailed the US fleet as it was passing through the strait.

“Be sure that they [US fleet] don’t dare take measures against us. Our approach is to think like the nights of operations; it means we should always be ready,” Sayyari told reporters Monday on the sideline of an event in Tehran, adding, “we will never let the fleet come near Iran’s territorial waters.”