US Aims to Revive ISIL in Eastern Euphrates

TEHRAN (defapress)- Kurdish sources warned that Washington's decision to withdraw the US forces from Eastern Euphrates does not mean losing the card to pressure Damascus as Washington aims to resurrect the ISIL terrorist group at the Iraqi-Syrian borders.
News ID: 74770 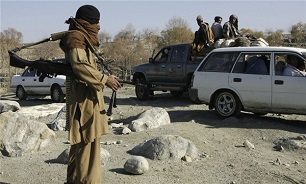 "The US aims to revive the ISIL at the strategic region of Eastern Euphrates, specially at the common borders of Syria and Iraq to cut the contacts between the two countries and other members of the resistance front; this issue has been one of the US strategic goals since the start of war against Syria in 2011," the sources were quoted as saying by the Arabic-language al-Akhbar newspaper on Friday.

The Americans have claimed that their deployment in Eastern Euphrates is aimed at fighting against the ISIL and supporting their Kurdish allies, but in practice Washington has left the Kurds without any support against the ISIL, said the paper.

The report came as the Syrian army forwarded more troops and military equipment to the Eastern deserts of Deir Ezzur last Wednesday, preparing for a large-scale operation to hunt down the remaining pockets of the ISIL terrorists.

The army dispatched the 4th Division and a part of Presidential Guard Forces to the Eastern desert of Syria from the small town of al-Dowayer up to the town of al-Hari near border with Iraq in Southeastern Deir Ezzur.

The army's growing military buildup in the Eastern desert of Deir Ezzur indicated that the government forces were preparing for a major operation to purge the entire region of the ISIL terrorists and put an end to any movement of the terrorists between Syria's Deir Ezzur desert and Iraq's Anbar.

The army's main objective is restoring sustainable security to the borders with Iraq.

Last Monday, the army forwarded a large number of troops, including the 5th Division, more tanks and armored vehicles to the small towns of al-Sukariyah and Huweija al-Moshahedah near the town of Albu Kamal near the border with Syria.

In the meantime, tens of army men, a number of Russian forces, several cannons and heavy weapons arrived at Deir Ezzur military airport and were further sent to regions near the small town of al-Dowayer.

The army's military buildup in Eastern Deir Ezzur near the border with Iraq signifies Damascus' plan to kick off a major operation to hunt down the remaining pockets of the ISIL still operating in the desert-like region.