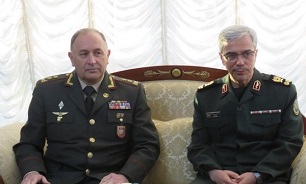 He made the remarks upon arrival at Baku’s Heydar Aliyev International Airport. The Iranian commander is paying a two-day visit to Baku upon the official invitation of Azerbaijan’s Minister of Defense Zakir Hasanov.

The Republic of Azerbaijan is among the main neighbors of Iran and shares many historical, religious and cultural features with the Islamic Republic, Bagheri told IRNA.

He went on to say that the two sides will discuss ways to boost military and security cooperation in the coming days.

The delegation from the General Staff of Iranian Armed Forces will spend two days in the Azeri capital to hold talks with the host country’s defense minister and other military officials, as well as the president, prime minister and parliament speaker of the Eurasian country.

A memorandum of understanding on military/defense cooperation between Tehran and Baku is planned to be signed at the end of the meetings, deputy head of international affairs at the General Staff of Iranian Armed Forces, Ghadir Nezami, said Tuesday.