Trump Statement on Military Option Proves US behind Venezuela Crisis

TEHRAN (defapress) - US President Donald Trump's recent statement on possible US military intervention in Venezuela is proof that Washington is behind an attempt to stage a state coup in the Latin American country, Venezuelan Foreign Minister Jorge Arreaza said.
News ID: 75399 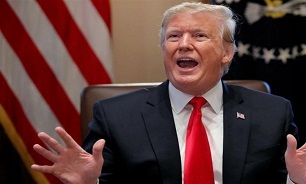 "Donald Trump confirms that he leads the state coup as he threatens to use military force again in violation of the UN Charter. The Venezuelan opposition is controlled by Trump", Arreaza posted on Twitter late on Sunday, Sputnik reported.

On Sunday, Trump said in an interview for the CBS broadcaster that US military intervention in Venezuela was "an option".

Venezuelan Vice President Delcy Rodriguez condemned Trump's statement on Sunday, stressing that the people of Venezuela would not allow any foreign interference.

On 23 January, Juan Guaido, the speaker of the Venezuelan opposition-led National Assembly, proclaimed himself the country’s interim president.

The opposition figure was supported by the United States and a number of other countries, while China, Mexico, Russia, Turkey, Iran and several other states backed constitutionally elected President Nicolas Maduro. Maduro has repeatedly blamed Washington for trying to stage a state coup in Venezuela.

US National Security Advisor John Bolton said Friday, however, that the White House had no plans for an imminent military intervention in Venezuela but all options with regard to the situation in that county remain on the table.

During a press briefing on Monday about new sanctions against Venezuela, Bolton was photographed holding a yellow notepad that read: "5,000 troops to Colombia," prompting widespread speculation that senior US security officials are discussing plans to deploy military forces to the Latin American country, which borders Venezuela.

However, Acting US Secretary of Defense Patrick Shanahan told reporters on Tuesday that he had not discussed with Bolton an apparent plan to deploy US troops to Colombia amid the current crisis in Venezuela.