TEHRAN (defapress) – Iranian Army's Deputy Commander for Operations Rear Admiral Mahmoud Moussavi said "we did not have any coast-to-sea missile before the Islamic Revolution; but our missiles have reached a range of of 300 kilometers today and will even increase in the near future."
News ID: 75440 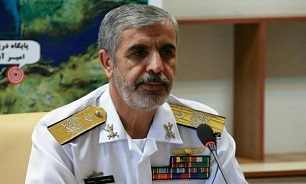 Maintenance and protection of equipment and facilities is an important military mission of Iran's Army from the beginning of the victory of the Islamic Revolution, which has been done satisfactorily, Moussavi told reporters on Wednesday.

Pointing to various military sacrifices at various phases of the Islamic Revolution, he said "the first crushing response was given by the Iranian Army air force to the enemy, and then in various land, sea, and air acenes, many Islamic Revolution's children were martyred to protect Iranian land.

Mousavi noted that "the Army has put the reconstruction of defense capability and equipment on its agenda after the Holy Defense period, and upgraded Iran's deterrent power by forming a sub-surface unit that is highly strategic and did not exist before the Islamic Revolution, and on the other hand by designing and building different missiles.

"we did not have any coast-to-sea missile before the Islamic Revolution; but our missiles have reached a range of of 300 kilometers today and will even increase in the near future," he added.

The deputy commander for operations said that the powerful presence of Iran in the Persian Gulf, the Caspian Sea and the oceans is another achievement of the Army after the Islamic Revolution, which indicates Army's capacity, authority, and defense capability has been improved so much that it is not comparable to before the Revolution.