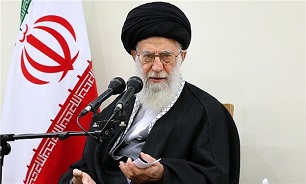 Ayatollah Khamenei in the statement elaborated on the features of the path paved by Iran in the past 40 years and the Islamic Revolution's blessings to help the country and its people ascend to the high position they deserve.

He also underlined real hope for future and the unique role of the youth in taking the second wide step towards the causes of the revolution, explaining to the young Iranian people the necessities for this major jihad (effort) under 7 main topics.

In his statement, Ayatollah Khamenei advised the Iranian nation, specially the youth, to double efforts to improve the country's scientific and research position, enhance spirituality and ethics, strengthen economy, increase justice and fight against corruption, fight for independence and freedom, protect national honor, set boundaries with enemies and avoid the western lifestyle.

The statement came two days after millions of Iranians in Tehran and other cities throughout the country poured to the streets on Monday to show their unconditional support for the Islamic Republic through staging massive rallies on February 11th, marking the 40th anniversary of the victory of the Islamic Revolution in Iran.

Huge masses of people from all walks of life converged on streets and squares all over the country to express their support for the cause and ideals of the Islamic Revolution.

A sum of 6,500 Iranian and foreign journalists, reporters and photographers covered the Bahman 22 (February 11) rallies this year.

Days before the rallies, the Leader said the 'Death to American' motto chanted by Iranians is aimed at White House rulers who happen to be President Donald Trump, Secretary of State Mike Pompeo and National Security Advisor John Bolton in the current administration and not the American people.

Few months earlier in December, Ayatollah Khamenei had also warned the Iranian nation to remain vigilant against new US plots for the next year, saying that Washington might have made done the propaganda this year, but be readying to stage the main part of its plot in 2019.

"Earlier this year, the US claimed that Iran was to have a hard summer and that the revolution wouldn’t see its 40th anniversary. To their dismay, this summer was one of the best summers; and the Iranian nation will magnificently celebrate the 40th anniversary of the revolution on 22nd of Bahman (February 11)," Ayatollah Khamenei said, addressing the family members of the Islamic Revolution's martyrs in Tehran.

The Leader of the Islamic Revolution of Iran called for the Iranian nation to keep vigilant in the face of deceits by the US, saying, "The Iranian nation should maintain their awareness. When the US says in 2018 they will do this or that, it could be a deceitful plot. They might want to stir controversy in 2018 while their actual plots are for 2019. You should be completely ready and alerted."

Ayatollah Khamenei described the US as a vicious enemy, and said, "The US is a wicked enemy, united with the Zionists and the reactionary regimes of the region. We are of course stronger and until now they have been unable to do a thing, and they won't be able to anything in the future."

The final collapse of the Shah's regime came on February 11 when the military renounced its loyalty to the Shah and joined the revolutionary forces.

On this day 40 years ago, people took to the streets to celebrate the collapse of the Pahlavi Dynasty and the emergence of the new era.