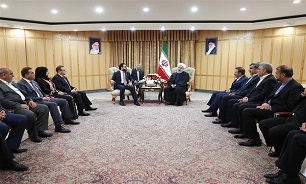 In a meeting with Speaker of Council of Representatives of Iraq Mohammed al-Halbousi in Tehran on Wednesday, Rouhani said Leader of the Islamic Revolution Ayatollah Seyed Ali Khamenei, the Iranian administration, and the Parliament are all determined to forge close and brotherly relations with Iraq.

"Security and stability in Iraq and the Islamic Republic of Iran are interrelated," the president stressed.

"The presence of Iraqi officials in Iran, and especially the close parliamentary relations are very good opportunities for further development of relations," the president’s official website quoted him as saying in the gathering.

The Iranian president further congratulated the Iraqi nation on the victory against the Daesh (ISIL) terrorist group, saying, "We are ready to develop our cooperation and relations in economic and infrastructural fields."

The Iraqi speaker, for his part, said, "We are against any kind of sanctions and siege against the Islamic Republic of Iran."

Appreciating Iran for supporting Iraq in the fight against terrorism, Halbousi said, "We believe that development of relations between the two countries contributes to stability in the region as well."

Heading a delegation, Halbousi arrived in Tehran on Wednesday. He also held a meeting with his Iranian counterpart.