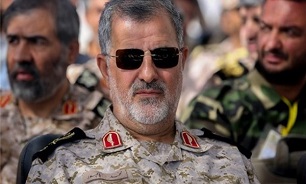 "The IRGC engineering units and Khatam al-Anbia Construction Base have reopened the flooded roads in Gomishan by building 19 bridges within 48 past hours," General Pakpour said.

The people in Gomishan had to use boats to travel around over the past few days after flash floods caused by heavy rain closed all roads.

General Pakpour, meantime, said that the IRGC will continue its relief operations to the people in flood-affected areas.

Supreme Leader of the Islamic Revolution Ayatollah Seyyed Ali Khamenei had earlier called on the country's officials and people to assist the flood-affected people. The Iranian Armed Forces, including the IRGC, Army, Basij, and Iran’s Red Crescent and all other relief forces have been assisting the people in flood-hit regions ever since.

Earlier the IRGC Commander Major-General Mohammad Ali Jafari arrived in flood-hit Golestan Province for the second time last week on Saturday to inspect the relief operations by the IRGC forces. On Sunday, on a visit to flood-hit regions in Mazandaran Province, Jafari expressed the readiness of IRGC forces to reconstruct damaged houses and villages in flood-affected areas.

Iranian authorities announced on Saturday that the death toll from flash floods across the country had risen to 42, as more rain showers are expected.

"Totally 42 people have been killed in floods and the resulting accidents," Head of Iran's Forensics Organization Ahmad Shojayee told FNA.

He added that 5 people in Mazandaran province were killed in floods, 2 in North Khorassan, 1 in Mashhad, 1 in Malayer, 1 in Sarpol Zohab, 7 in Golestan, 2 in Kohgilouyeh and Boyer Ahmad, 2 in Lorestan, 19 in Shiraz, 1 in Khuzestan and 1 in Semnan.

While the nation was shocked by the casualties and magnitude of destructions in the Northern regions of the country, another round of floods hit the country in the Western and Southwestern provinces last Monday.

The Gate of Quran has been built on a dry river bed and ten minutes after the start of sudden torrential rains at around 11:00 am local time last Monday more than 50 cars were washed away to the down of the slope into the city. Hitting trees and other streets signs and curbs the overrun cars piled up one another a kilometer down from the city gate.

Governor General of Fars Province Enyatollah Rahimi said that the sudden flash flood happened in less than 10 minutes with the flow of water from Allah-o-Akbar gorge converging into the main road and affecting the moving vehicles.

The Director General of the provincial office of Iran Meteorological Organization in Shiraz Masoud Dehmalayee said that in parts of the city precipitation rates overpassed 107 percent last Monday.

The public relations department of the regional water organization of Fars Province also said that all dams in Fars were sitting pretty with 1.5 billion cubic meter unfilled capacity “which is perfectly capable of containing any flood water”.

In the Southwestern province of Khuzestan flash floods cut off many roads including Andika road connecting Andika to Shehr-e-Kurd, the capital city of the neighboring province of Chaharmahal and Bakhtiari.

Iranian President Hassan Rouhani, in a statement last Monday, offered condolences to the bereaved and affected families, and ordered swift reaction by all relevant executive bodies and aid agencies.

He also tasked the interior minister and the governor general of Fars province to explore the reasons behind Monday’s deadly flood in the city of Shiraz and deal with all possible parties who have failed to fulfill their duties in this regard.

He had already last Sunday put all governors, governors general and officials in all Iranian provinces on full alert as widespread flooding continued in many parts of the country.

Iran's Islamic Revolution Guards Corps (IRGC) announced in a statement last Monday that units of its Aerospace Force had been dispatched to help people stricken by flood in the Northern Iranian province of Golestan.

The statement added that the IRGC forces are using helicopters to provide flood-hit people with provisions, including food and drinking water, and transfer necessary equipment for relief workers.

Campaigns calling for collecting donations to help the flood-hit families have been launched by aid agencies, celebrities, and public figures.

Campaigns are aimed at raising money and gathering basic commodities required to start the reconstruction and rehousing operations. Imam Khomeini Relief Foundation (IKRF) offices around the country are ready to receive the aid data-x-items and deliver them to the flooded areas.

Chief of Staff of the Iranian Armed Forces Major General Mohammad Hossein Baqeri said last Saturday that he had ordered additional and coordinated efforts to help the relief campaign.

He has authorized commanders in the IRGC, the Iranian army, police, and the defense ministry to use forces under their command to provide “full and organized” assistance in flood-hit areas in a coordinated manner.

General Baqeri has appointed his deputy, Major General Ataollah Salehi, as the field commander at the head of a group of high-ranking military chiefs to coordinate relief efforts between the armed forces and civilian organizations on the ground.

Interior Minister Abdolreza Rahmani Fazli, who has been touring the flood-hit regions, told reporters that relief efforts had been going forward at a strong pace thanks to coordination among all sides.

Authorities in Aqqala, one of the cities hardest hit by flooding, said they had to detonate a small part of the railway network in the area in order to speed up drainage and prevent greater damage to the tracks.

During the operation, explosives were placed underneath the tracks to help drain the flood waters.

According to local officials, no parts of the tracks were damaged in the explosion and the network would resume operations soon.