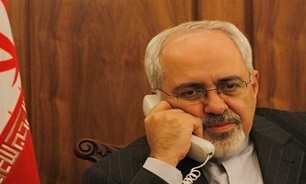 In a telephone conversation, Zarif and Sabah also exchanged views about the latest developments in the Middle East and world, Kuwait’s local media reported.

Zarif made the phone call to express Iran’s gratitude to the Kuwaiti government and people for their assistance to Iranian flood victims.

Kuwait sent a second batch of humanitarian aid for the survivors of the recent deadly flash floods in Iran that continue to cause heavy damage in the southwest.