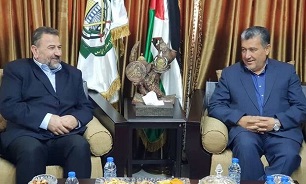 During a meeting with the deputy leader of the Palestinian resistance movement Hamas, Saleh al-Aruri, which was held in the Lebanese capital Beirut, Khojaste said, “Today, the issue of Palestine is at the top of the political issues of the global community and the free nations of the world.”

Reiterating the Islamic Republic’s firm stance in supporting the resistance movement against the occupying Israeli regime, the official praised the continuous resistance of the Palestinians against the pressures and conspiracies of Israel and the US.

He noted that the ongoing resistance in Palestine has been so triumphant, which has made the occupiers and their allies think of new conspiracies, like recognizing Jerusalem al-Quds as Israel’s capital. Such plots are already doomed to fail, he added.

Heading a parliamentary delegation, Khojasteh arrived in Beirut on Thursday for a two-day official visit.

After their stay in Beirut, the Iranian lawmakers will depart for Damascus today where they will meet the Syrian People's Assembly Speaker Hammoudeh Sabbagh and a number of their counterparts as well.