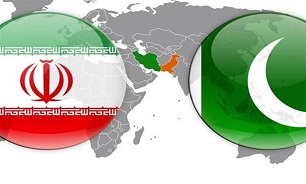 Qureshi on Saturday briefed the media on steps taken by the country to strengthen security along its porous border with Iran a day before the Pakistani Prime Minister Imran Khan is due to arrive in Iran for a long-awaited visit.

He told journalists in a press conference in Islamabad that Pakistan had already taken “six steps” to ensure stability along the Iran border as part of a project dubbed the “border of peace”.

He said a new command has been formed in the Pakistani city of Turbat to improve the effectiveness of border guards deployment in the area while a new Frontier Corps will be responsible for smooth management of the border.

Qureshi said Iran and Pakistan had already started setting up joint border centers while agreeing to synchronize border patrolling exercises and carry out heli-surveillance to prevent incidents like those in the past that have affected security in the region.

The top Pakistani diplomat also elaborated that a project to fence the entire 950-kilometer border between Iran and Pakistan had already kicked off from the points frequently exploited by terrorist groups.

The announcement comes amid Iran’s frequent calls on Pakistan to ensure security along the border and prevent certain groups to cross the frontier and carry out acts of terrorism in Iran.

As many as 27 Iranian military officers were killed in February in an attack in Iran’s Sistan and Balouchestan province. Tehran blamed groups active inside the Pakistani territory for the attack.

Qurashi’s remarks also came two days after some 14 Pakistani navy personnel were killed in an attack in a remote area of Pakistan's southwestern province of Balochistan. Islamabad has said that a group which it claims is active inside Iran was behind the attack.

Iranian Foreign Minister Mohammad Javad Zarif condemned the terrorist attack on Thursday, saying it was a sign that extremists and their sponsors were terrified by close relations between Iran and Pakistan.

The border security between Iran and Pakistan will be a key theme of Imran’s imminent visit to Iran. The two-day trip will begin on Sunday with a short visit by Imran to the northeastern Iranian city of Mashhad before he comes to Tehran to hold official talks with the Iranian officials.