TEHRAN (defapress) – The forces of the Yemeni army and Popular Committees attacked positions of the Saudi-led coalition and its mercenaries, deploying its drones and firing five domestically made ballistic missiles, local reports said.
News ID: 77045 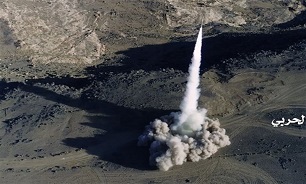 The Yemeni forces on Thursday evening mounted artillery and drone attacks on the vehicles and facilities of the Saudi Army in the kingdom’s southwestern province of Jizan, the Arabic-language al-Masirah TV reported.

The operation was carried out several hours after another drone attack on a command center of the Saudi-led coalition in Yemen's coastal city of Aden.

In another operation on the same day, the missile command of the Yemeni army and Popular Committees hit gatherings of the Saudi-backed mercenaries with 5 ballistic missiles dubbed “Zelzal-1” in in Asir border region.