TEHRAN (defapress)- Head of the Islamic Revolution Guard Corps Public Relations Department Brigadier General Ramezan Sharif said on Friday that American troops dispatched to the Persian Gulf from home thousands of miles away are not motivated enough to fight a war with Iran and as a result are shivering with fear.
News ID: 77538 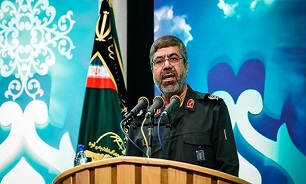 “We are today witnessing American soldiers in the Persian Gulf with shivering hands and pale faces standing behind a mountain of equipment living like robots in the face of the will of the progenies of this nation,” Brigadier General Ramezan Sharif said today, in a ceremony on commemorating the 39th anniversary of the liberation of Khorramshahr from the military of the former Iraqi dictator Saddam Hussain.

“In the battlefield, we fought against those who were more motivated, powerful and regionally dominant than Americans. Whom are you trying to frighten with sending troops from thousands of miles away,” added the IRGC commander.

The commander reminded that after the victory of Iran in Operation Beytolmoqaddas, which led to the liberation of Khorramshahr, thousands of enemy soldiers escaped and thousands of them were caught captive, and asked, “What’s your escape way back if you make a mistake?”

"If today, the criminal America and its Western and regional allies do not dare to conduct a direct military confrontation against our country, it is due to the willingness of the people and the youth to resist and make sacrifices,” Major General Rashid.

He also described liberation of Khorramshahr as a symbol of national unity and a turning point in the history of Islamic Iran, which was achieved through the sacrifices of the men and women of the heroic Iran with God Almighty’s help.

In relevant remarks earlier this month, General Rashid underlined Iran's high preparedness to stand against aggressors, warning that any war against the country would damage the entire region.

"We do not welcome war in the region because it will definitely benefit the US and the Zionist regime but we are men of war and will stand against any aggression and will defeat it (the enemy) with God's help and warn that the costs of war will not be paid only by our nation," General Rashi said, addressing the Army Ground Force commanders in Tehran.

He underlined Iran's common interests with the neighboring countries in safeguarding regional stability, security and development, calling on them to desist from behaviors that serve the interests of the US and Israel which do not have any goal but sowing discord and war in the region.

"All the regional people should pay the costs of war in the region and it will harm common life in this region," General Rashid said.