Decline of US power in future obvious

TEHRAN (defapress) – It is obvious that the US’ power will decline in future and the victory will be for the Chinese and the Iranian sides, the Chinese Ambassador to Tehran Pang Sen said on Wednesday.
News ID: 77593 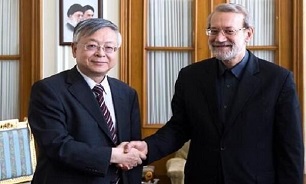 In a meeting with Iranian Parliament Speaker Ali Larijani, Sen said that “during the past five years, Iran and China have maintained warm relations through which they improved cooperation in trade and economic sectors.”

“Although Americans seek to impede Iran-China relations, we are optimistic about the future of our relations with Iran,” he said.

Larijani, for his turn, appreciated the ambassador’s services during the past five years, since he will leave the office soon.

Earlier today, the Chinese envoy held a meeting with Iranian Parliament Speaker Special Aide on International Affairs Hossein Amir-Abdollahian in Tehran,where he said that “China pays a specific attention to expanding its ties with Iran.”

Criticizing the US pressures and threats, he said that “the time of unilateralism and putting pressure on independent countries has finished.”

China is one of the five remaining parties to the Iran nuclear deal, in addition to Britain, France, Germany and Russia. It is also a major importer of Iranian crude oil and a permanent member of the UN Security Council.

The US sanctions include a ban, imposed last November, on oil purchases from Iran. It opposes the decision made by the US to tighten sanctions on Tehran.

On May 17, China called for expanding its “friendly and longstanding” ties with Iran, despite the US’ unilateral sanctions against the Islamic Republic. China Foreign Ministry Spokesperson Lu Kang announced that China will put all-out effort to maintain and boost its longstanding ties with Iran.