TEHRAN (defapress) – Top Military Aide to the Iranian Leader, Major General Yahya Rahim Safavi, said the first sign of military aggression in the Persian Gulf will hike up oil prices to over $100, which will be unbearable for US and allies.
News ID: 77628 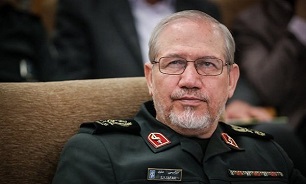 “The first firing [of rockets] in the Persian Gulf will hike up the oil price to more than $100. The 100-dollar oil will be unbearable for Europe, the US, and its partners such as Japan and South Korea,” Top Military Aide to the Iranian Leader, Major General Yahya Rahim Safavi, said in an interview with Fars published on Sunday.

The US is just blustering around politically and military-wise, he said, noting that American troops have started retreating from the region since two weeks ago.

Safavi also maintained that all foreign vessels in the Persian Gulf are in the firing range of Iranian missiles.

Safavi then voiced Iran’s readiness to sign a non-aggression pact with neighboring countries.

“We pursue a non-aggression strategy with our neighbors. Recently, Foreign Minister Zarif proposed to sign a non-aggression agreement with neighboring countries. My suggestion is to sign the pact with some countries and form a coalition with some others,” he added.

Safavi then voiced hope that regional countries would stop thinking of Iran as the enemy and instead focus their attentions on their real enemies, namely the US and the Israeli regime.