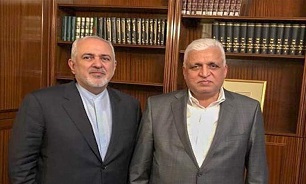 The media office of Mr. Fayyadh, who is also head of Hashd al-Shaabi (aka Popular Mobilization Units) delegation in Iraq, said in a statement that the Iraqi advisor has held talks with top Iranian diplomat in Tehran on Monday, Alsumaria News reported.

In the meeting, Fayyadh and Zarif have discussed Tehran-Baghdad relations, the ways to boost bilateral ties between the two neighbors, and the approaches to establishing security and stability in the region and resolving the crises, it added.

During a landmark visit to Baghdad in March, Iranian President Hassan Rouhani said the development and stability of Iran and Iraq, without which security would not prevail in the region, are interrelated.