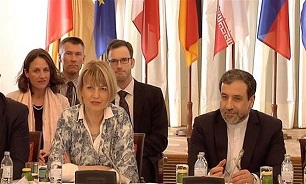 On Wednesday, Helga Schmid referred to the Iran nuclear deal, also known as JCPOA, as a key pillar of security in the region, saying that she would meet and hold talks with Iranian officials on the status of JCPOA and the activation of EU's proposed trade mechanism for Iran, INSTEX.

Helga Schmid started an official visit to countries in the Persian Gulf region, starting with the United Arab Emirates followed by Oman, Qatar and Iran. The visit takes place against the backdrop of the prevailing tensions in the region. The visit will also aim at discussing the preservation of the nuclear deal with Iran, in the wake of the US' unilateral pullout from the agreement and the imposition of sanctions against Tehran.

Following the US' withdrawal, the foreign ministers of the remaining signatories to the JCPOA agreed to create to launch the European channel for transactions with Iran, called INSTEX. The mechanism is yet to become operational.

In the previous weeks, German Foreign Minister Heiko Maas and Japan's Prime Minister Shinzo Abe met with Iranian officials and conferred on the JCPOA, as well as Iran-US tension.