TEHRAN (defapress)- US President Donald Trump has promised his French counterpart Emanuel Macron to rejoin the Paris Agreement in return for France's efforts to coax Iran into making concessions on its missile and regional policies.
News ID: 77935 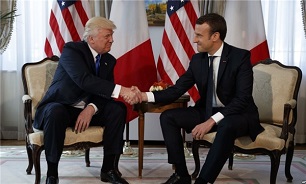 The Persian-language Nour News reported on Sunday that Trump and Macron held an important meeting on the sidelines of the G20 summit in Osaka during which the US president rejected Macron's demand to return to the Paris Agreement in the near future.

But Trump has promised Macron that he would announce the US rejoining the Agreement before November 2020 if Paris succeeds in persuading Iran to accept a new deal, it added.

According to the report, Trump has also promised to decrease the US support for France's National Front which won over Macron's party in the latest European parliamentary elections.

Taking up the cudgel on climate change in the face of American opposition, President Emmanuel Macron of France threatened Wednesday not to sign any joint statement from the Group of 20 summit in Japan unless it deals with the issue, which he called a “red line.”

In a rebuke of American officials, Macron emphasized the importance of reiterating support for the Paris climate agreement of 2015, from which President Trump has vowed to withdraw the United States.