TEHRAN (defapress) – Iran has reacted to a recent provocative decision by the Bahraini government to host a summit on regional maritime threats, under the pretext of countering the “threats posed by the Islamic Republic”.
News ID: 78312 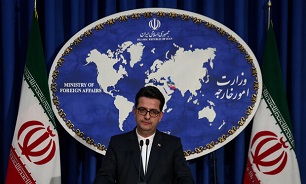 “The Bahraini authorities should stop their unreasonable measures... They should adopt more constructive approaches, instead." Mousavi said.

Bahrain is planning to host a summit, in collaboration with the US, on the region’s maritime and aviation security, under the pretext of finding ways to counter the threats “posed by the Islamic Republic.”

The Iranian spokesman stressed that such conferences are only aimed at undermining the security and stability of the region, and they provide the grounds for the trans-regional powers and the Israeli regime to interfere in the region’s affairs.

He reiterated that the Islamic Republic of Iran expects the regional states to prevent any interference of non-regional countries by taking more rational policies.