TEHRAN (defapress) - The presidents of Iran and Turkey highlighted Tehran and Ankara’s resolve to strengthen bilateral ties in all fields of mutual interest.
News ID: 78366 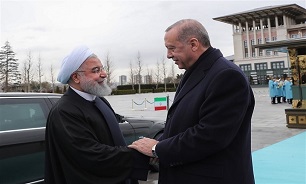 In a telephone conversation with his Turkish counterpart Recep Tayyip Erdogan on Sunday, Iranian President Hassan Rouhani congratulated the Turkish government and nation, and all Muslims around the world, on Eid al-Adha.

“The Islamic Republic of Iran is fully ready to deepen ties with Turkey as a friendly and brotherly country,” the president’s official website quoted Rouhani as saying.

The Iranian president also emphasized the need to accelerate the implementation of previous agreements between the two Muslim countries.

For his part, Erdogan congratulated the Iranian government and nation on Eid al-Adha, saying, “Ankara is ready to further promote relations with Tehran in all fields.”

The Turkish leader also expressed hope that Eid al-Adha would pave the way for stronger unity and brotherhood among Muslim nations.

Eid al-Adha is one of Islam's holiest festivals celebrated annually around the world and an official holiday in Muslim-majority countries.

In the Islamic calendar, Eid al-Adha occurs on the 10th day of the lunar month of Dhu al-Hijjah and is also the third day of the Hajj pilgrimage in Mecca.

For Muslims, Eid al-Adha commemorates the day when Prophet Abraham was going to sacrifice his son but was instructed by God to offer an animal instead. Eid al-Adha in Arabic literally means "festival of the sacrifice".

Traditionally, the festival lasts for four days but public holidays vary from country to country.