TEHRAN (defapress) – Russian President Vladimir Putin told his Japanese counterpart Shinzo Abe on Thursday that Tokyo’s military ties with the United States and many other issues made it hard for Japan and Russia to sign a World War Two peace treaty.
News ID: 78604 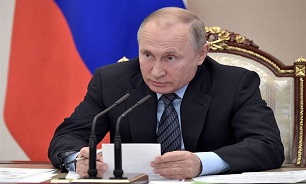 Putin made the comment at an economic forum in Russia’s Far East after Abe called on him to resolve a row between the countries over a disputed chain of islands that has prevented the two countries signing a peace treaty.

The Russian leader said he hoped that a peace treaty could be signed in future however, and that the two countries could eventually resolve their long-running differences, Reuters reported.

Moscow has repeatedly raised concerns about US military systems being deployed on Japanese territory.