TEHRAN (defapress)- Deputy Commander of Iran's Basij (Volunteer Force) Brigadier General Mohammad Hossein Sepehr underlined that his country is standing among the strongest states in the world in defense power, noting that the capability has deterred enemy aggression.
News ID: 78781 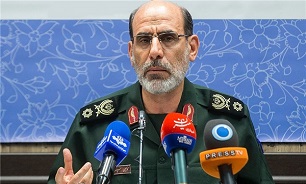 "Today, we have developed the defense power to the extent that the enemies may not have a greedy eye to make an aggression; we will also live through this hard situation in economic field (too) as enemy cannot pose any more threats and they will bow to our demands," General Sepehr said, addressing the Armed Forces' parades in the Eastern province of South Khorassan on Sunday.

"We have established such a defensive and security power that we are now standing among the four superior world states in defense power and no superpower dares to make any aggression against the country," he added.

His remarks came as the Iranian Armed Forces displayed and unveiled for the first time various types of missiles, equipment and air defense systems developed by the country's experts during the Sunday military parades.