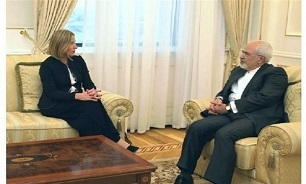 During the meeting, Zarif and Mogherini discussed the future of the 2015 nuclear deal, known as the Joint Comprehensive Plan of Action (JCPOA).

In a post on his Twitter account on Tuesday, Zarif criticized the E3 – France, Germany, and the UK – for failing to fulfill their obligations under the JCPOA due to US pressures, stressing that no new deal will be negotiated until the current one is fully honored.

“E3's paralysis in fulfilling their obligations w/o US permission has been clear since May 2018. Solution to this deficiency: mustering will to forge independent path—not parroting absurd US claims & requests INCONSISTENT with JCPOA. No new deal before compliance w/ current one,” Zarif tweeted.