TEHRAN (defapress) – Iranian Ambassador to Iraq Iraj Masjedi said a recent attack on Iran’s consulate in the city of Najaf was aimed at spoiling relations between the Islamic Republic and Iraq.
News ID: 79415 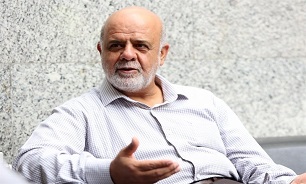 In remarks on Thursday, Masjedi said the objective behind a Wednesday attack on the Iranian consulate in Najaf was damaging the close and brotherly ties between Iran and Iraq at the hands of certain foreign and domestic elements in Iraq.

The foreign mercenaries in Iraq receive support from the hostile networks to hurt the amicable ties between Tehran and Baghdad, he noted.

The ambassador also noted that the Iraqi society is opposed to the measures carried out by a small group of thugs.

He finally called on people of Iran to show self-restraint, giving an assurance that the acts of a small group would not reflect the manner of Iraqi people who have proved friendship with Iran on various occasions.

Anti-government protesters stormed and set the Iranian consulate ablaze in Iraq’s southern city of Najaf on Wednesday, drawing condemnation from Iraq's government, as the political turmoil continues to escalate.