TEHRAN (defapress) – Foreign Minister Mohammad Javad Zarif said Saturday that Iran’s science and technology advances have become like a thorn in the eyes of the ill-wishers of the country.
News ID: 79517 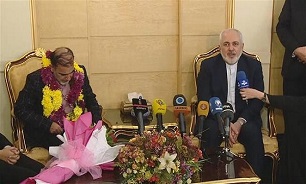 The Iranian diplomat made the remarks upon arrival at Tehran’s Mehrabad Airport while accompanying the Iranian stem cell scientist Dr. Masoud Soleimani who has been freed after over one year of imprisonment in the United States.

The Iranian foreign minister said in a tweet earlier in the day that the top scholar, along with Xiyue Wang — a Chinese-born US citizen who had been sentenced to 10 years in prison for espionage in Iran in 2017 — had been delivered to the Swiss officials and would “be joining their families shortly.”

Zarif told reporters that he is "very happy that on National Students’ Day, one of the greatest professors and scientists of our country is returned home."

Rebuking the US for indicting the Iranian professor “without any reason”, Zarif said “they arrested a university professor with 500 scientific articles after they invited him and gave him a visa to do research at the highest US scientific institute."

According to the Iranian minister, Dr. Soleimani had been repeatedly offered by the United States to stay in the US instead of returning home but the “patriotic professor" turned down their request.

Dr. Soleimani, for his part, said Iran’s scientific advances have made the US officials angry.

“The US aim is to be Iran’s enemy. They are Iran’s number one enemy. When they took me to jail, they told other inmates that I was a terrorist that wanted to detonate a bomb to keep other inmates away from me but others did not believe this claim. When I told them that my patients are waiting for me, they told me that it was no problem, let them die.”

“The US is afraid of our developments; that’s why we have to strengthen our scientific progress,” he added in Tehran after being released.

He called on Iranians to build up the country’s scientific front to further make the enemy disappointed.

He also thanked Iranian officials for securing his release.

Back in October last year, Soleimani, 49, left Iran on sabbatical last year but was arrested upon arrival in Chicago and transferred to a prison in Atlanta, Georgia for unspecified reasons.