TEHRAN (defapress) – Iranian Foreign Ministry Spokesman Abbas Mousavi reacted to the derogatory anti-Iran comments made by the US Secretary of State Mike Pompeo, saying despite being a foreign affairs diplomat, he seeks to scatter enmity and extremism by his hawkish behavior.
News ID: 79624 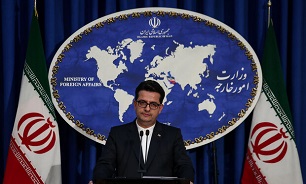 “Pompeo is not on any foreign minister's level in the world and has no [real] position in this field,” Mousavi said on Friday.

The spokesman added, “Pompeo moved from leading a deceitful and evil organization [CIA] to leading the US Department of State, and he has continued the same hellish behavior in the diplomatic arena.”

Mousavi said while the world’s foreign ministers are harbingers of peace, conciliation, dialogue and respect, Mr. Pompeo has turned into a bullying, deceitful figure who follows nothing but the language of violence, hawkishness, ignorance, and extremism.

The United States on Thursday announced new sanctions against Iran, targeting individuals in the judicial courts and security services over the handling of the recent protests against fuel price hikes in the country.

The sanctions were imposed on two Iranian judges, accusing them of punishing Iranian citizens and dual nationals for participating in the protests.

Meanwhile, US Secretary of State Mike Pompeo said that the State Department was also imposing visa restrictions on current and former Iranian officials complicit in what he called human rights abuses against protesters.

He did not name the officials but said the visa restrictions would also extend to their family members.

The move triggered protests that some rioters took advantage of to destroy public property and torch banks and gas stations.

Following the unrest, Pompeo urged Iranians to send photos and other information documenting what he called “repression,” while vowing to sanction "abuses" by the Iranian government.