China to hold maritime drill with Iran, Russia on Friday

TEHRAN(defapress) – Defense Ministry spokesperson Wu Qian said on Thursday that China, Iran and Russia are to hold the planned joint maritime exercise from Friday to Monday in the Gulf of Oman.
News ID: 79688 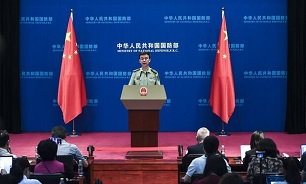 "China, Russia and Iran will hold a joint maritime exercise from Friday to Monday in the Gulf of Oman," Global Times reported on Twitter.

"The Chinese Navy will send guided-missile destroyer Xining to participate," Wu Qian was quoted as saying.

A joint military drill with China and Russia can be considered as one of the greatest achievements of Iran's defense diplomacy showing the successful diplomacy of Iran.

This joint drill which was called ‘Maritime Safety Belt’ by Iran’s Navy commander will be held on December 27, 2019, said a senior spokesman for the General Staff of the Iranian Armed Forces Brigadier General Abolfazl Shekarchi.

Reports during the last week show that the Chinese and Russian navies have moved to Iranian waters to participate in the joint naval exercise.

Russian Navy will participate in this drill with three vessels, including a Neustrashimy frigate class named "Yaroslav Mudry", a tugboat named "Yevgeniy Khorov" and a tanker named "Yel'nya".

Chinese Navy also will take part in the event with a Type 052D destroyer named Xining.

The composition and capability of warships deployed by China and Russia to the waters of the region to conduct joint drill with Iran show that this joint event is of strategic importance to Russia and China as the two countries have deployed advanced and new vessels to carry out the exercise.

On the other hand, this joint naval drill of Iran, China and Russia can be considered as the counter to the US-led coalition for maritime security in the Persian Gulf.