Russia Takes over Base Left by US Forces near Syria's Raqqa

TEHRAN (defapress) – Russian military police have taken control of a base near the Syrian city of Raqqa that was controlled by US forces until a few days ago, a report said.
News ID: 79694 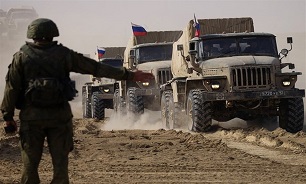 Russian forces entered the nearby city of Raqqa earlier this month as Moscow rushed to fill a vacuum created by US President Donald Trump’s decision to pull troops from northern Syria.

The base, a former school in the village of Tal Samin, is in a strategic area at a crossroads that links the city of Raqqa with central Syria and its northern regions, the Tass news agency said on Thursday.

It cited Arman Mambetov, a Russian military policeman, as saying that he and colleagues would begin patrolling the surrounding area from Thursday.