Iran calls on intl. community to counter US unilateralism 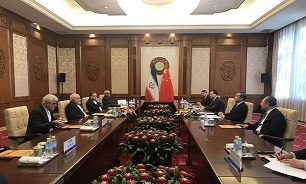 He voiced the request in a Tuesday meeting with his Chinese counterpart Wang Yi in Beijing, while also condemning the US unilateral sanctions against Iran.

Zarif said that the role of China in supporting international issues, such as the case of Iran, is highly important.

Elsewhere, he noted that enhancing bilateral ties between the two countries to a strategic level demonstrates Tehran and Beijing’s eagerness to boost relations.

The aim of this trip is to maintain the ties while also discuss some issues, added Zarif.

For his part, Wang Yi said that the two countries need to preserve bilateral ties and at the same time exchange views on different issues.

A statement by the Iranian Foreign Ministry on Tuesday notes that the two sides discussed bilateral ties, JCPOA, and regional and international developments during the meeting.

Zarif arrived this morning in Beijing and held the first round of meetings with Wang Yi.

The meeting in Beijing came on the heels of Zarif's visit to Moscow on Monday where he held talks with Russian Foreign Minister Sergey Lavrov.