Leader vows to take revenge on US beyond military operations

TEHRAN (defapress) – Spokesman of the Iranian Armed Forces Brigadier General Abolfazl Shekarchi pointed to yesterday’s remarks of the Leader in a meeting with a large group of people from Qom saying that military operation won’t suffice and US corrupting presence in the region must end.
News ID: 79849 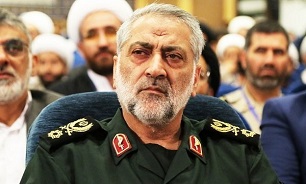 He referred to the demand of Leader of the Islamic Revolution, people and senior officials of the government for taking hard revenge on US in assassinating IRGC Quds Force Commander Lt. Gen. Qasem Soleimani and his companions and reiterated, “Iran will take revenge on US beyond the military operations.”

The baseless remarks by US officials showed that they can do nothing in the face of high power and authority of the Islamic Revolution and Resistance Front, Shekarchi emphasized.

Turning to Iran’s missile attacks to US military bases in Iraq’s Ayn al-Asad in retaliation of US assassination of IRGC Quds Force Commander Gen. Soleimani, he stated, “with launching psychological warfare, US tries to dictate its attitude and compensate for the gap in military issue where they are so weak.”