Merkel, Putin Agree to Save JCPOA, Ignoring Trump’s Call to Ditch It

TEHRAN (defapress) – Angela Merkel and Vladimir Putin agreed to fight to save the 2015 nuclear deal between Tehran and world powers after meeting in Moscow amid escalating tensions in the Middle East.
News ID: 79874 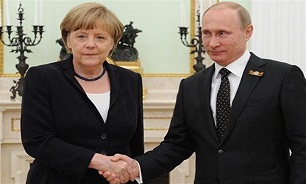 The German Chancellor said “everything must be done” to keep the agreement, despite calls from US President Donald Trump to abandon it, while the Russian president described the deal as “tremendously important.”

The 2015 Joint Comprehensive Plan of Action (JCPOA) is under pressure after Trump pulled out of it last year, triggering Iran's decision to intensify its enrichment of uranium.

“We agreed that we should do anything to preserve the deal, the JCPOA. Germany is convinced that Iran should not acquire or have nuclear weapons," Merkel said during a joint press conference with Putin, Euronews reported.

“For this reason, we will continue to employ all diplomatic means to keep this agreement alive, which is certainly not perfect but it is an agreement and it comprises commitments by all sides,” Merkel said.

Iran has consistently denied pursuing nuclear weapons, stressing that its nuclear program is for peaceful purposes.

The European Union has said that it will “spare no effort” to keep the 2015 deal alive despite Trump’s call to abandon it.

“It’s not dead, we have to bring it back to life,” Slovak Foreign Minister Miroslav Lajcak said of the deal earlier this week.