Deal of Century Doomed to Failure 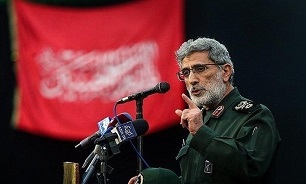 In separate phone calls with Hamas Political Bureau Chief Ismail Haniyeh and Secretary-General of the Islamic Jihad Movement of Palestine Ziad al-Nakhala on Sunday, Brigadier General Esmaeil Qa’ani reiterated the Islamic Republic’s unwavering support for Palestinians and their campaign against the US plan.

“The shameful deal of the century plan was born dead and, like previous schemes for compromise, it is doomed to failure,” the Iranian commander stated.

“The American statesmen are only seeking to please the Zionist criminals, and to that end, they will resort to any crime and treachery,” he said.